All proceeds from the bazaar will go directly to the vendors. (Roya) 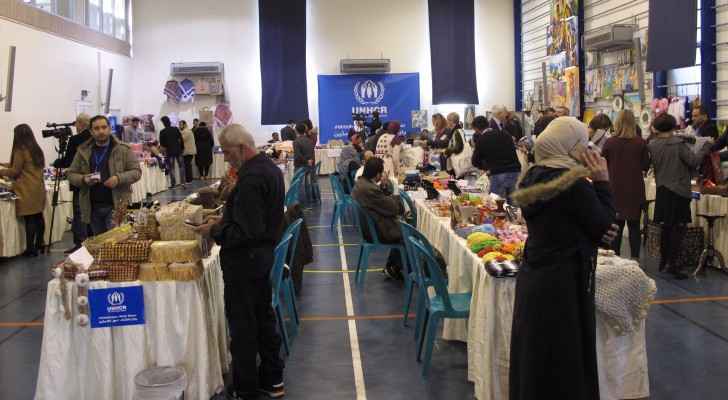 A colourful and eclectic range of arts, crafts and homemade goods went on sale today in Amman, as refugees and refugee-supporting initiatives gathered together to display their items at a winter bazaar, organised by UNHCR.

The three day #WithRefugees event, taking place from December 5 to 7, aims to support refugee and disadvantaged communities, by providing a space for those with creative and entrepreneurial spirit to display their work.

“This is an opportunity for us to have refugees, or corporations that support refugees, come and display their handicrafts and produce. It is an opportunity to give them visibility,” UNHCR Representative to Jordan, Stefano Severe, told Roya at the opening of the bazaar. “We are trying to see how we can help refugees enter the upscale handicraft market, giving them some level of income.”

Exhibiting around 30 displays of artwork, handicrafts, and clothes among other items, refugees from a range of countries and communities highlighted some of the traditional skills, arts and crafts used to maintain their cultural heritage.

Among the exhibitors is Ahmad Daasan, a Syrian refugee living on Jordan, selling handcrafts of wooden panels and furnitures inlaid with mother-of-pearl.

“This is a Damascene traditional craft started since the Umayyad Caliphate, I inherited it from my grandparents,” Daasan, told Roya. “It is designed exactly like the Andalusian way, because we got it already from there.”

“Before the Syrian war, we used to make those hand crafts and export it to Europe and Arab countries, but it stopped, and now, we are reviving this hand craft in Jordan to tell the world that we are here, we exist, and we can be productive,” he added. Along one of the bazaar walls hangs a series of artworks, created by Muhammad Jokhadar, a Syrian painter from the city of Homs who has been living in Jordan’s Zaatari camp for the last five years.

“Most of my paintings are about the war in my country, about the struggles faced by all Syrian refugees around the world, our living conditions in the camp and the tragedy Syrians living in Syria,” Jokhadar told Roya. “I also love to paint traditional paintings, like the old Damascene city to show the world our culture and heritage.” Alongside the work of refugees, the bazaar also includes products of local initiatives designed to provide support for refugee and disadvantaged communities. Orenda Tribe, a lifestyle brand that features children's art from refugee camps and less fortunate communities on its products, hosts a table selling a range of bright tshirts, etched with children’s drawings.

“We are using art as a tool to beautify communities to empower children and people,” founder Zaid Souqi told Roya. “We go to refugee camps, and we use art to paint schools, make them more beautiful for kids to go to them. We do art therapy, art education, then we use part of the art on the t-shirts. So we put the children’s art on the shirts, to empower children and to champion them.” All proceeds from the bazaar will go directly to the vendors, with the aim to boost the entrepreneurial spirit and potential of refugees in Jordan.

What's more, the event brings to light the array of creative talent among the refugee community, creating a safe and dignified space for individuals to trade and display their work.

“It creates some sort of dignity and brings it back after seven years into the war, and this is the most important thing,” said Nida Yassin, Assistance External Relations Officer with UNHCR.
“You’ll see everyone is happy and smiling and this is one of the main purposes why this bazaar was held, to draw smiles on these people’s faces after so many terrible things that happened to their lives.”