A march against gender-based violence in Amman, Jordan. (Roya) 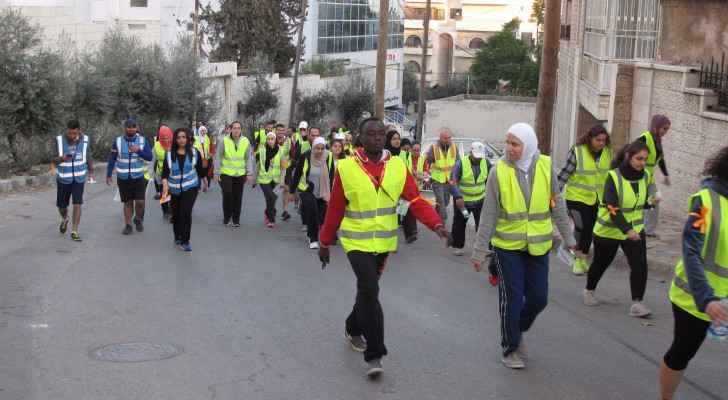 Dozens of men and women took to the streets of Jordan’s capital Amman on Friday to march against gender-based violence, as part of the UN’s 16 days of activism.

Organised by Global Platform and ActionAid Youth Hub, in collaboration with 8 Districts walking group, the walk aimed to raise awareness of violence against women in Jordan and the world, as part of an international campaign to challenge gender based violence. “There is not equality in Jordan between women and men, on a good level. There is domestic violence, there is economic violence, there is violence in different aspects in Jordan,” Afnan Haloush from the East and West Center for Sustainable Development, told Roya as she walked from Amman’s fifth circle as part of the awareness campaign.

“We are here today to support women on different levels and reach our voices to the decision makers to say we need to change the legislation and laws to be fair towards women,” Haloush added.

A similar sentiment was expressed by Qais Suliman, a Jordanian volunteer with ActionAid. “Especially in my city, women do not feel safe or feel equal to men, so I would like to support them to do everything we can do, so they are equal, based on laws or even societal laws,” he told Roya. “I feel I have to do this, this is how I was raised by my mum and dad, everyone is equal.” Women across the world are subjected to sexual harassment and violence, and Jordan is no exception, with a high number of cases going unreported. A local study by SIGI (The Sisterhood is Global Institute) in 2015 revealed that one in two female survivors of sexual assault in Jordan hesitate to file a complaint against their offenders out of fear of shame or scandal, while a local 20016 study revealed that only 3 per cent of victims of gender-based violence would seek support from the police after experiencing violence.

These are high numbers, particularly given the levels of recorded violence experienced by women in the kingdom. According to Human Rights Watch, 15 to 20 women and girls in Jordan are killed by family members for having supposedly transgressed social codes of “honor” and the National Council for Family Affairs noted that 76.6% of women suffer from some form of physical violence.

Alongside this, aspects of Jordan's legal system do little to effectively address the issue. A 2017 report by the UN Committee on the Elimination of Discrimination against Women, “laws and initiatives undertaken to protect and empower women were not in fact fully complete” in Jordan, a situation highlighted by the ranking of the kingdom in terms of gender equality dropping to 140th position in 2015, according to the Global Gender Gap. “Whoever says there is not harassment in Jordan, I think he lives in another Jordan,” Haitham Abdullah, Global Platform’s Youth Hub Organiser, told Roya. “Harassment is not just grabbing a girl, it can be saying something, it can be giving these creepy looks to her. So its verbal, it’s physical, it’s emotional. Harassment and violence against women can take 100 million forms,” he added.

However, headway has been made in protecting women from sexual attacks. Earlier this year, the lower house of Jordan’s parliament voted to eliminate article 308, which allows rape charges to be dropped as long as the rapist marries their victim and stays married for at least five years.

“One of the main problems we are facing today - as Jordanian society and in general - we are lacking a lot of critical thinking,” Abdullah told Roya. “If you are only able to change people's mind on that level only, in their critical mind and how they are critical about things, then I promise you we will have a better future.”

Afghan girls deprived of education: 'Our country has ....

Afghan girls deprived of education: 'Our ....