The ship was carrying 2,800 tourists. (CruiseMapper) 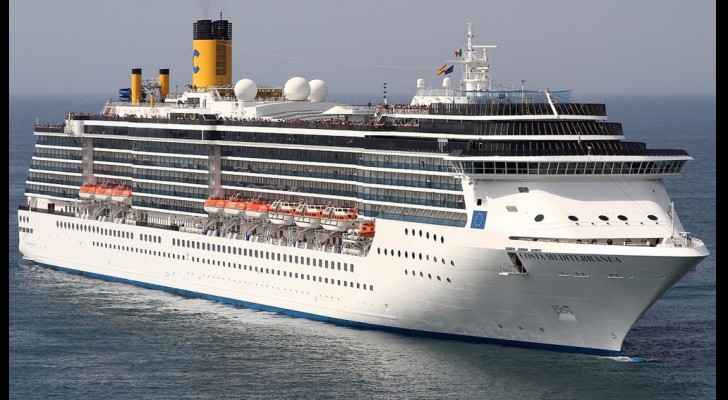 The shores of Aqaba were filled with 2,800 European tourists on Sunday morning, after their cruise ship, the grand Costa Mediterranea, was docked at the Port of Aqaba - the only port in Jordan.

Sharhabeel Madi, the Commissioner for the Aqaba Special Economic Zone Authority (ASEZA), said that 1,300 of those tourists will do a day trip to Petra, while the remaining 1,500 tourists will spend the day exploring Aqaba.

Madi explained that docking cruise ships at the port is within ASEZA’s plans to boost tourism in Aqaba and Petra.

ASEZA is collaborating with international companies specializing in marine tourism to launch the winter tourism season in Jordan, for tourists visiting from Europe.

Madi said that thousands of tourists visited Aqaba since the beginning of 2017, many of whom travelled here on a cruise ship.

At least two cruise ships were docked at the Port of Aqaba every week since the beginning of the year during the peak tourism season.

In response to the rise in the number of visiting cruise ships, ASEZA is planning on building a port that will only dock cruise ships.

Seventh MP resigns from Lebanese government in protest of ....