UN calls on Libya to take 'urgent' action over slavery 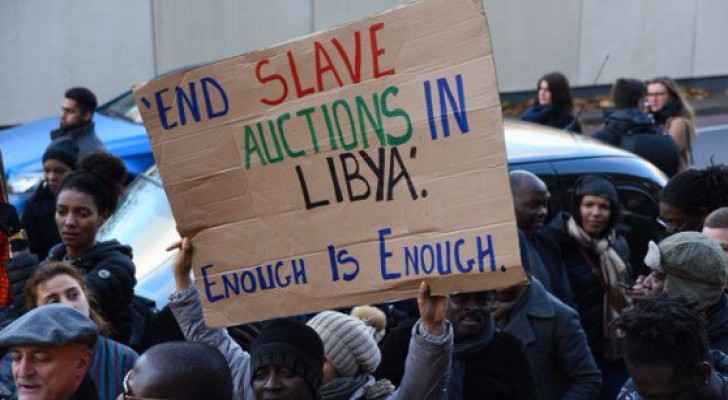 The United Nations urged Libya to "take urgent action" to end the trade in enslaved people, following reports that hundreds of African migrants are being bought and sold in markets across the country every week.

"It is now clear that slavery is an outrageous reality in Libya. The auctions are reminiscent of one of the darkest chapters in human history, when millions of Africans were uprooted, enslaved, trafficked and auctioned to the highest bidder."

The statement called on the Libyan government and the international community to "take immediate and decisive action to ensure that this crime does not continue", calling for the immediate release of those already enslaved.

"It is imperative that the authorities urgently locate and rescue the victims of this horrendous crime and that Libya holds the perpetrators accountable," the statement noted, adding that migrants in Libya "are at high risk of multiple grave violations of their human rights, such as slavery, forced labour, trafficking, arbitrary and indefinite detention, exploitation and extortion, rape, torture and even being killed".

The announcements come after shocking revelations that African asylum seekers and migrants making their way to Europe were being sold into slavery in Libya, with a video of men appearing to be sold at auction in Libya for $400 drawing global attention.

The footage and subsequent investigation conducted by CNN last month shows smugglers selling off a dozen men outside of the capital city Tripoli. “Does anybody need a digger? This is a digger, a big strong man, he’ll dig,” said an auctioneer, according to CNN. “What am I bid, what am I bid?”

The report has since encouraged European and African leaders to take action to stop the abuses, with the African Union, European Union and UN announcing the creation of a task force to deal with the migration crisis, specifically in Libya.

On Thursday, it was announced that Libya has reached a deal with European and African leaders to allow the emergency repatriation of refugees and migrants facing abuse in detention camps in the North African country.

"This disgraceful drama reminds us of the darkest hours of humanity. I call on our collective sense of responsibility to take urgent action," Alassane Ouattara, president of Ivory Coast, said at a two-day African-European Union summit in Abidjan.

The summit, which was meant to focus on development in African countries, shifted focus primarily to the Mediterranean refugee crisis.

French President Emmanuel Macron said leaders were concentrating on fixing "a series of very critical issues and atrocities, like in Libya".

However, Antonio Guterres, the UN secretary-general, said it was important to address the deeper problems behind the issue.

"We will not put an end to the tragedy in the Mediterranean if we do not create significant, legal migration opportunities. We must also ensure that people can find a dignified future in their home country," he said during the meeting.

An estimated 700,000 migrants are in Libya, which is among the key transit pathways towards Europe, according to a UN estimate.

Sharp decline in vegetable exports from Jordan to Israel

Sharp decline in vegetable exports from ....