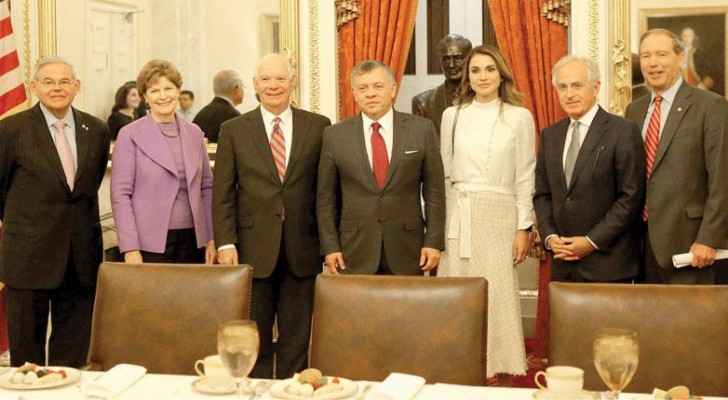 "We have senators of both parties, and across the political spectrum, and we’re all coming to help Jordan," said Senator Patrick Leahy of Vermont, the ranking Democrat on the Senate Committee on Appropriations.

It is worthwhile to meet with His Majesty when he visits Washington, DC, Senator Leahy added, observing that "for someone who sits back here, as much as we study [the region], it is impossible to fully understand it," he noted.

Senator Lindsey Graham (R-South Carolina), a member of the Senate Committee on Appropriations, said: "Republicans and Democrats are having a hard time reaching an [agreement] on almost anything, except Jordan."

"The role of Jordan is really indispensable. It’s a country that everyone respects," Graham added.
Representative Kay Granger (R-Texas), chair of the House Appropriations Defence Subcommittee, said the King is a "world figure that really is a man of peace, and he’s smart enough to get things done for his country and other countries. I really look up to him, and over the years 10 years that we’ve been meeting, his opinion is very important."

Representative Granger also stressed the United States’ keenness to support and help Jordan, in order to enable it to deal with the refugee issue, noting: “We want to be helpful with that issue, as well as many others that Jordan is coming to talk to us about", she added.

His majesty warned that “failure to reach a just and comprehensive solution to the Palestinian cause will fuel further extremism and violence in the Middle East.”

He also expressed strong support to the Trump administration’s attempts to relaunch the Israeli-Palestinian negotiations and emphasised Jordan’s position that such negotiations should be based on the two-state solution and on the Arab Peace Initiative.