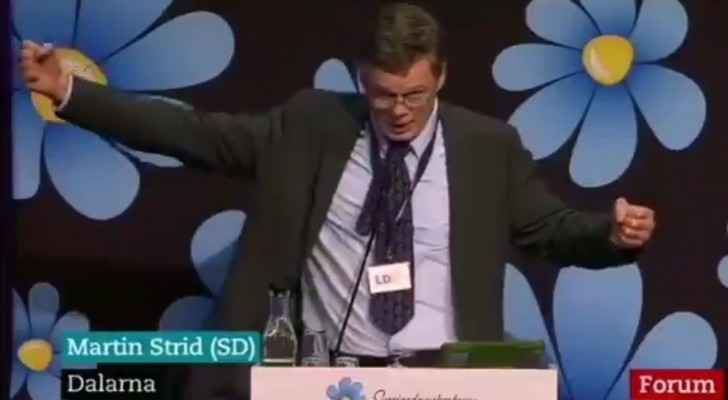 Swedish politician Martin Strid, a member of the right-wing Sweden Democrats (SD), was forced to resign on Monday after he said in a live TV debate that Muslims were “not fully human.”

During SD’s national conference, Strid ranked Islamists on a scale from “0 to 100.”

"On one end, you are 100% human, a person, everything that’s part of that concept. At the other end, you are 100% Mohammedan,” Strid commented, according to the translation provided by Swedish edition of The Local.

Strid continued by saying that "all Muslims are somewhere on that scale" and that members of terror group ISIS "are close to being 100% Mohammedan."

"If you are an ex-Muslim you have come quite far towards being fully human," Strid said.

He added that he wants to "free Muslims from Islam, the goal is for them to join SD instead."

The speech was broadcasted on SVT, the Swedish national public TV broadcaster, who said that Strid was reported for hate speech on Sunday.

Strid later apologised for his statement. "It was very unfortunate, I expressed myself very clumsily," he told news site TT.

Despite his apology, this is how social media users reacted to Strid’s comments.

A call for genocide wnd ethnic cleansing by #MartinStrid exactly like what the nazi did with jews https://t.co/6u7LVOcMyF

Do you really think you're human? If you ask me, you are a 100% idiot. The world is talking about you stupid ...! Idiot...! The turkish proverb says: Stupid is always stupid.

#MartinStrid it is very easy for a human to understand what Muslim is, but for an animal it is impossible.

Can't believe a country like Sweden even allowed a man like Martin Strid think he's a politician :/

Nazis described Jews as Untermenschen, or "subhumans," as a means to prepare the groundwork for genocide.

Martin Strid's claim that "Muslims are not 'fully human'" is verbatim the Nazi playbook. This is not "free speech." It is incitement to terrorism.https://t.co/iV0XaDioMD

So now we have people in Sweden who says on television that muslims aren’t real human beings!
I literally want to leave this planet as of now! https://t.co/puTSPpC36r

"Everyone has fundamental human worth, the same for everyone. If you think that someone has a worse value based on a certain skin colour or the community they are part of, that is racism for me. We will not accept that," Jomshof said, according to The Independent.

Later, SD board member and MP Aron Emilsson officially distanced the party from Strid, saying: "It is a statement we, from the party leadership, take a clear distance from. Categorising people and human values based on what religious beliefs you have is a way we cannot argue.”

General elections in Sweden are scheduled for September 2018, with the Sweden Democrats becoming a popular party in the country, according to one poll, The Independent said.

MP calls on government to summon Chinese ambassador in ....

MP calls on government to summon ....