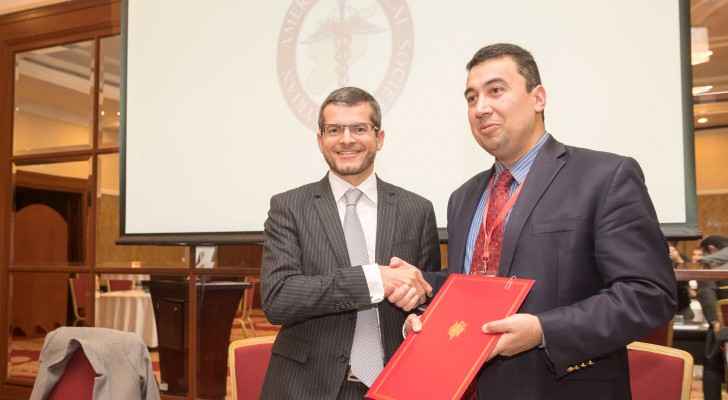 A partnership agreement to provide medical and psychosocial aid to vulnerable populations in the south of Syria and in East Ghouta was signed today in Amman, Jordan, by the French Ambassador to Jordan, David Bertolotti, and Dr. Aref Al-Kali, Vice Chair of the Syrian American Medical Society (SAMS) Foundation Board of Directors.

The signing took place during a meeting with SAMS-supported Syrian surgeons from the region of Daraa.

“We are proud to launch this partnership with the French government. Their vital support will allow us to reach the most vulnerable populations inside Syria, who live from day to day without consistent access to medical care,” SAMS’s Country Director in Jordan, Mousa Naffa, said in a SAMS press release.

With 350,000 Euros financial support from France, SAMS will be able to provide technical support, and finance a primary care center, a mobile care unit, and a psychosocial center in the region of Daraa.

The French Ambassador emphasized that this aid is part of France’s larger efforts to respond to the needs of vulnerable populations inside Syria, especially in the field of health.

At the signing, Bertoletti also assured the Syrian doctors of France’s full engagement in protection for Syrian civilians, humanitarian actors, and medical personnel in Syria and all conflict zones, who face deliberate attacks.

Dr. Al-Kali indicated that since the start of the conflict, SAMS has been one of the most active organizations in coordinating medical aid inside Syria, due to its vast network of skilled doctors throughout the country.

Medical relief will come as a relief to these two areas in Syria, where services are minimal.
Currently, opposition-held areas of Daraa city are lacking essential infrastructure and public services, a situation worsened as thousands of displaced residents return to city under the Russian-backed ceasefire, according to Syria Direct.

Meanwhile, Eastern Ghouta has been under siege by Syrian government forces for four years, with minimal food and medical supplies that have almost completely gone.