China strengthens its ties with Jordan this week

A visitor watches Chinese children's paintings at the King Abdullah Cultural Centre in Zarqa, Jordan, on Nov. 12, 2017. The activities of the Chinese 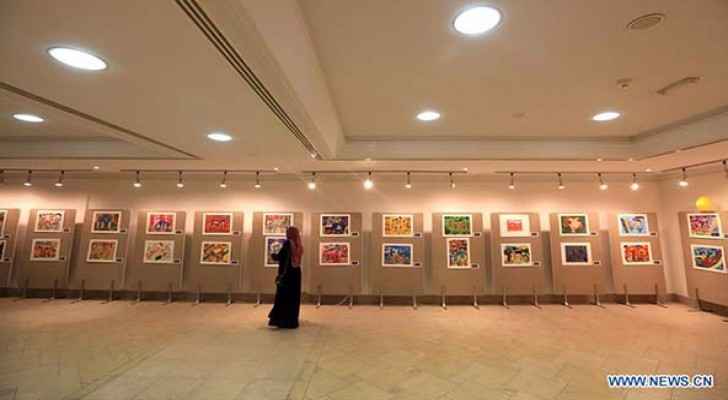 China has been busy strengthening its ties with Jordan this week, holding a Chinese Cultural Week in Zarqa and pushing forward trade agreements under its One Belt One Road initiative.

The opening of the cultural week, a collection of exhibitions and shows, was timed with the 40th anniversary of diplomatic ties between China and Jordan. Aiming to raise awareness of Chinese history and culture, it comes ahead of a planned cultural centre in Amman, the Chinese Ambassador to Jordan, Pan Weifang, said at the launch ceremony in Zarqa.

On Monday Mr Pan announced that China and Jordan would sign a memorandum of understanding designed to increase economic cooperation between the two counties.

The agreement is part of China’s One Belt One Road policy which has the ambitious aim of creating a new Silk Road trade route from China, across Central Asia and the Middle East, to the lucrative markets in Europe.

Why has Jordan, a country with few natural resources, attracted so much attention from energy-hungry China?

It helps that Jordan is one of the few reliable partners in the Middle East. Ideally located next to Syria, Palestine, Egypt, Lebanon and Iraq, all countries with market potential but also political instability, Jordan can act as China’s gateway to the Middle East. Although none of these countries can help with China’s energy needs they are still a significant market for Chinese goods.

While Jordan’s most important bilateral relationship is with the United States, China will be hoping that a deluge of investment money will help change the balance.

In particular, there are vital Chinese investments in Jordan’s energy, infrastructure and transportation sectors.

Around $5-6 billion has flown from China’s coffers to the kingdom’s nuclear energy programme. Another $1.6 billion has gone to shale oil projects and China is currently bidding for solar, wind and hydropower energy projects, according to Ambassor Pan. Groups of Chinese investors are making weekly trips to Jordan, and the number of Chinese tourists to the country continues to grow.

And between 1999 and 2016 China provided Jordan with grants and loans totalling $225 million.

Unlike the United States, China has good relations with countries across the region, even with those at odds with each other. It has long held ties with rivals Saudi Arabia and Iran, and sells arms to Israel while at the same time supporting Palestinian statehood.

But despite this range of relationships, China will likely continue to rely on Jordan for its outsized role in stabilising the Middle East. More than anything else, China craves energy security. China’s dependence on oil from the region has only increased over the years, with 50-60% of its oil imports coming from the Middle East.

That makes China acutely vulnerable to oil supply disruptions and at the moment there is little that China can do about it. Supporting strategic partners like Jordan with investments and trade links is China’s best option for creating a more stable Middle East while strengthening its hand in the vital region.