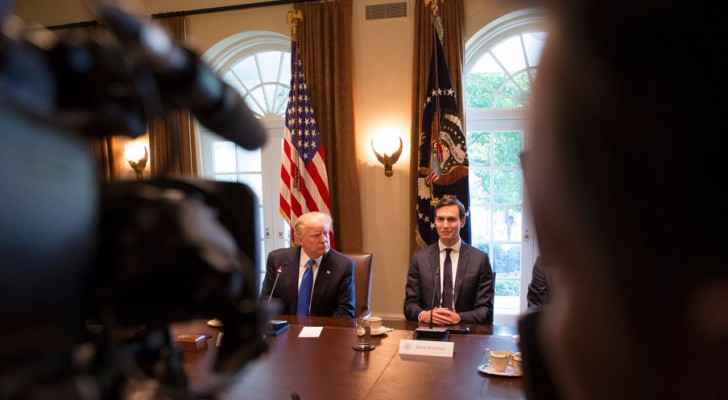 US President Donald Trump's advisers on the Middle East have begun developing a plan to end the decades-long Israeli-Palestinian conflict.

The plan aims to go beyond previous US government frameworks in seeking what Trump calls the "ultimate deal," according to a New York Times report.

After ten months of educating themselves about the hardships of the most complicated dispute in the world, White House officials said that the new Trump team, specialized in peacemaking in the Middle East, has now moved to a new phase in its project, to turn what they had learned into concrete steps to end the deadlock that frustrated even the presidents with more experience in the region, the Newspaper said.

But the prospects for peace are still limited to other issues in the region, as seen in the final days of Saudi Arabia's growing confrontation with the Iranian-supported Hezbollah. Israel is also concerned about Hezbollah and Iran's efforts to establish a land passage in southern Syria. If a war breaks out with Hezbollah, it could undermine any initiative with the Palestinians.

However, the Trump team compiled "non-papers" in search of various issues related to the Israeli-Palestinian conflict, and officials said that they expected to address such controversial points, like the Jerusalem issue and settlements in the West Bank. Although Trump did not commit to a Palestinian State, analysts said they expected the plan to be built on the so-called two-state solution that has been the heart of peacemaking efforts for years.

“We have spent a lot of time listening to and engaging with the Israelis, Palestinians and key regional leaders over the past few months to help reach an enduring peace deal,” said Jason D. Greenblatt, the president’s chief negotiator.

“We are not going to put an artificial timeline on the development or presentation of any specific ideas and will also never impose a deal. Our goal is to facilitate, not dictate, a lasting peace agreement to improve the lives of Israelis and Palestinians and security across the region,” he added to the American newspaper.

Mr Trump, who considers himself as the architect of the agreement, decided to take up the challenge when he took office last January. Eager for the idea of succeeding where other chiefs failed, he assigned Jared Koshner, his son-in-law and Chief Advisor to take on the peacemaking task.

Trump believes that now is the right time to solve the Israel-Palestinian conflict, especially that he is confident that Arab countries are willing to solve this issue, in order to refocus on Iran as the biggest threat at the moment.

Thus, Egypt mediated reconciliation talks between Mahmoud Abbas, who runs the West Bank, and the Islamic Hamas movement, which controls Gaza, a deal that would strengthen the Palestinian Authority as a representative of the Palestinians. Saudi Arabia summoned Abbas to Riyadh to promote the importance of reaching an agreement.

“The stars begin to align in a way that creates a moment,” said Nimrod Novik, a fellow at the Israel Policy Forum, and ex-foreign policy adviser to former Prime Minister Shimon Peres, who negotiated the Oslo Accords with Yasser Arafat in the 1990s. “But obviously the two key questions are will Prime Minister Netanyahu decide to go for it” and “will President Trump, once he’s presented a plan by his team, decide it is worth the political capital required.”