Jordanian journalists have less freedom in 2017 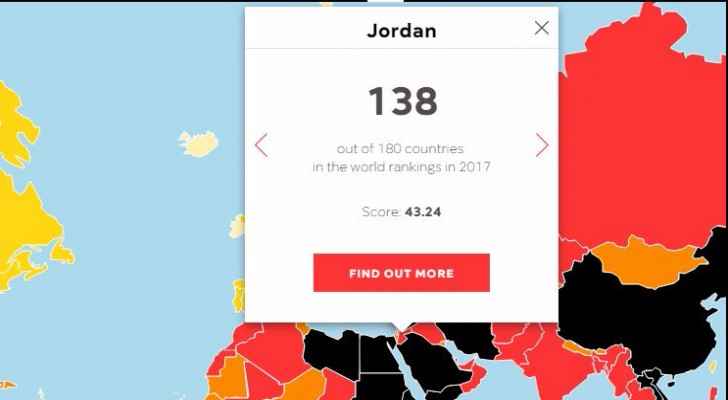 Journalists in Jordan have less freedom in 2017 than they did last year, according to the 2017 World Press Freedom Index.

Jordan ranked in 138th place, falling back three places from 2016, according to the index, which ranks 180 countries.

The index is an annual report published, since 2002, by Reporters Without Borders (RSF).

In comparison with countries in the Middle East, Jordan came in 11th place.

According to the RSF website, “The scores and indicators measure the level of constraints and violations, so the higher the figure, the worse the situation.”

Journalists in Jordan are careful not to report on certain individuals or subjects.

“Jordan’s media take care to observe the limitations set by the authorities. Journalists are subject to close surveillance by the intelligence services and must be affiliated with the state-controlled Jordanian Press Association,” the report stated.

“Hundreds of websites have been blocked since 2013 because they do not have a license. Security grounds are often used to prosecute and sometimes jail journalists under an extremely vague terrorism law.”

The Center for Defending Freedom of Journalists has published six reports on government censorship in Jordan, according to the Committee to Protect Journalists (CPJ).

The reports criticized the government for failing to achieve its 2013 pledges to uphold the press freedom in the country, particularly in regard to online publications.

Norway, Sweden, Finland and Denmark were ranked as the top four countries with the most freedom available to journalists, according to the index.