Syria to sign Paris Climate Change accord leaving only US opposed

Syria signs the agreement leaving US the only opposition. 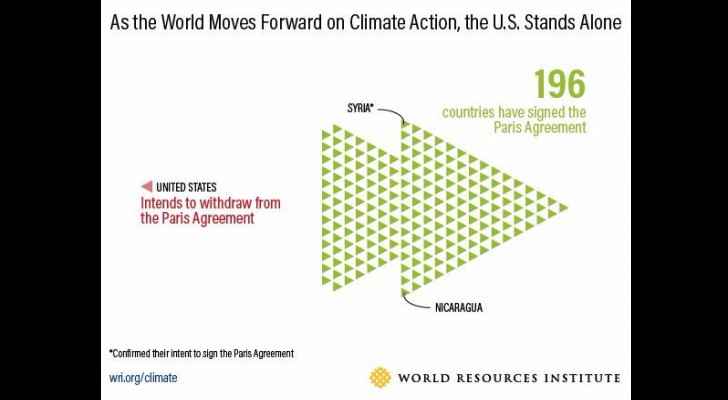 Syria announced it will sign on to the Paris Climate Change accord on Tuesday, at COP23 in Germany, leaving the US as the only country outside the agreement.

During the conference, which is held in Bonn, Germany, the Syrian delegation told the 200 nations that Syria is planning to sign up to the pact that seeks to cut greenhouse gas emissions.

Syria has not officially submitted any documents about its plans yet, according to the UN Secretariat who is organizing the meeting.

US President Donald Trump announced his country’s withdrawal from the agreement in June, arguing that by staying in the pact, it would undermine the economy and put the country at a permanent disadvantage.

COP23 and the Paris Climate Change Accord

The 23rd annual “conference of the parties” (COP23), held 6-17 November in Bonn under the UN Framework Convention on Climate Change (UNFCCC), will assess the world’s progress in dealing with climate change.

COP23 comes less than two years after the landmark adoption of the Paris Climate Change Accord, the UNFCCC agreement dealing with greenhouse gas emissions mitigation, adaptation and finance starting in the year 2020.

The agreement aims to deal with greenhouse gas emissions mitigation, adaptation and finance, and respond to the global climate change threat by keeping a global temperature rise this century well below 2 degrees Celsius.

Syria and Nicaragua were the only nations outside the deal when it was agreed in 2015. Nicaragua signed in October 2016 but the US announced in June its withdrawal from the agreement.