Refugees crossing the Mediterranean sea on a boat, heading from Turkish coast to the northeastern Greek island of Lesbos, 29 January 2016. (Wikimedia 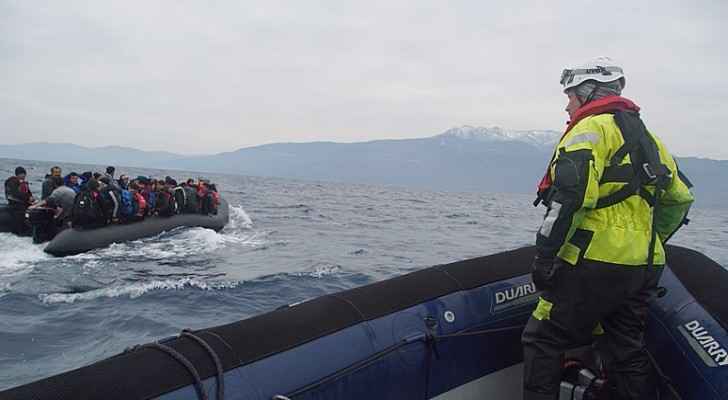 “Violent and reckless” behavior by Libyan Coast Guards has led to the death of at least five people at sea, including one child, on Monday morning, German Charity Group Sea Watch has reported.

The incident occurred after Sea Watch 3 responded to calls from the Italian Maritime Rescue Coordination, to assist passengers on a sinking inflatable boat in the Mediterranean.

The Sea Watch 3 crew arrived at the location at the same time as the Libyan Coast Guards, who reportedly began interfering with Sea Watch operations by forcing passengers onto their vessel to take them back to Libya.

“The Libyan Coast Guard approached the boat as well and took over people from aboard the boat, however beating and threatening them. Onboard panic started and a numerous refugees fell overboard,” Sea Watch wrote in a statement.

The Libyan ship reportedly took off at an inappropriate speed, as people hung to the side of the boat, being dragged along the water. An Italian navy helicopter was eventually forced to intervene to try and calm the situation.

According to Sea Watch, at least 5 people were killed in the incident, among them a child.

Fifty-eight others were taken safely aboard Sea-Watch 3, while the Libyan coast guard took a number of unknown passengers back to Libya.

The incident took place in international waters far outside of Libyan territorial waters, according to Sea Watch, suggesting the Libyan side “clearly violated international law.”

“The Seawatch was approaching while we were rescuing migrants,” he said. “This was encouraging the migrants to swim to the Seawatch and a (nearby) French navy ship,” Reuters reported.

Libya is the main departure point for migrants trying to travel by boat to Europe. So far this month, 2,500 migrants have reportedly been rescued and brought to Italy.

Jordan to participate in Women4Mediterranean ....

Jordan to participate in Women4Mediterranean ....

Jordan to participate in ....