"Queen Elizabeth" made a guest appearance at the event. (Twitter) 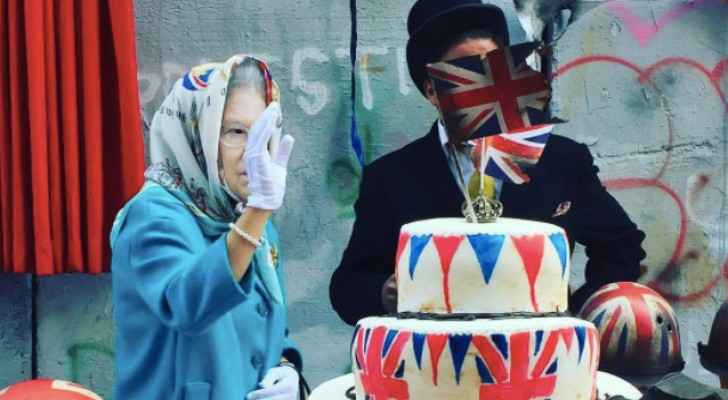 The surreal event was hosted by an actor dressed as Queen Elizabeth II for a British-style tea party, and attended by around 50 children all donning "party hats," which were bullet-riddled helmets with British flags on them.

With a banquet table lined with British treats, tattered UK flags, and red, white, and blue balloons lined up between the "Walled Off" and Israel’s looming separation barrier, the bleak event ironically celebrates the British agreement, which paved the way for the creation of the state of Israel.

The event also saw a “formal apology” over Balfour, with "Queen Elizabeth" revealing a plaque saying "Er, Sorry," a play on the common initials for Elizabeth Royal.

The apology was etched into Israel's separation wall.

Big "celebration" day in #Palestine as @thereaIbanksy sets up a party in front of the Walled-Off Hotel in #Bethlehem #Balfour100 #Respect pic.twitter.com/Vtb6I0JSi8

The attending children were all descendants of Palestinians forced to flee their land in the 1948 war surrounding the creation of Israel.

The 100th anniversary of the Balfour Declaration takes place on Thursday, when the British government said it viewed "with favour the establishment in Palestine of a national home for the Jewish people".

British Prime Minister Theresa May recently sparked controversy when she said that her country would celebrate the centenary of the Balfour declaration, which established the State of Israel, “with pride.”

Amnesty International: Theresa May must ....