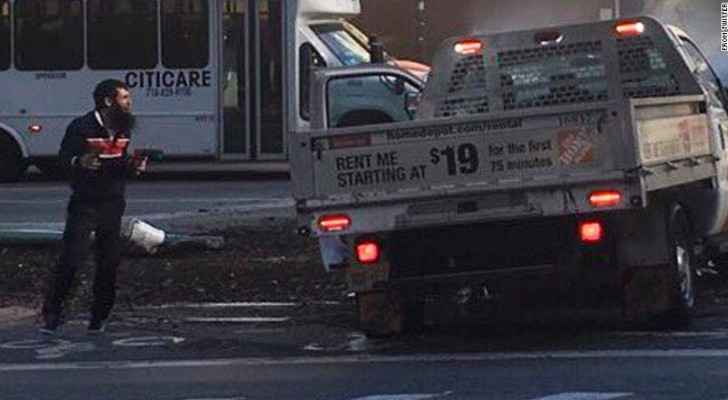 At least eight people were killed and dozens injured after a car drove into a busy bicycle path near the World Trade Center in Manhattan, New York City, on Tuesday.

A 26-year-old man in a rented pickup truck drove into a bike path hitting all cyclists and pedestrians, before colliding with a school bus down the path.

The driver exited the truck with a pellet gun and a paintball gun, CNN reported, and witnesses said he started shouting ‘Allahu Akbar”.

Police officers arrived to scene and fired at the man. The attacker was shot in the stomach, and police took him into custody.

The suspect was later identified as being from Uzbekistan in Central Asia, although he had been living in the US since 2010, according to CNN reports.

Police found a note in the truck claiming the attack was carried out in the name of ISIS, a senior law enforcement official confirmed to CNN.

"This was an act of terror, and a particularly cowardly act of terror," New York Mayor Bill de Blasio said, "aimed at innocent civilians, aimed at people going about their lives who had no idea what was about to hit them."

In NYC, looks like another attack by a very sick and deranged person. Law enforcement is following this closely. NOT IN THE U.S.A.!

Jordan Embassy in Washington: Jordanians in US urged to ....