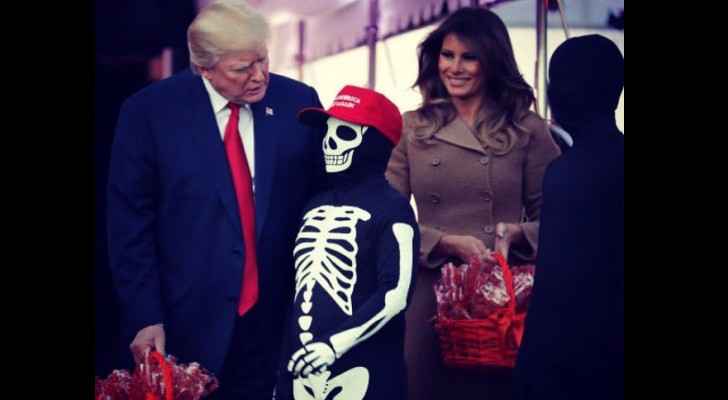 President Trump and the first lady Melania arrived on the South Portico for the White House's annual Halloween event on late Monday, to celebrate Halloween for their first time in the White House.

Trump and first lady welcomed 6,000 children wearing costumes as dinosaurs, athletes, police officers, skeletons and more. Children were invited for the White House on Halloween eve along with their military families and members of unspecified community organizations, according to
Bloomberg.

Halloween has been always celebrated at the White House since the mid-20th century, with each administration putting its spin on the holiday, according to the White House Historical Association.

Trump had chatted with children, posed for photos, but when asked about Paul Manafort, who was pleaded not guilty to charges of money laundering unrelated to the 2016 election, he waved to reporters and did not comment.

Separately, Trump’s election campaign advisor,George Papadopoulos, had pleaded guilty to lying to the FBI about the timing of meetings with alleged go-betweens for Russia.

He admitted the talks happened while he was working for Trump, not before, court papers show.

The charges against Papadopoulos are the first to be brought by Robert Mueller, the special counsel investigating alleged links between Russia and the Trump campaign.

Analysts expected the scandal might cause damage to Trump since it is related directly to his campaign and his relations with Russia.

Have you ever heard of National Banana ....