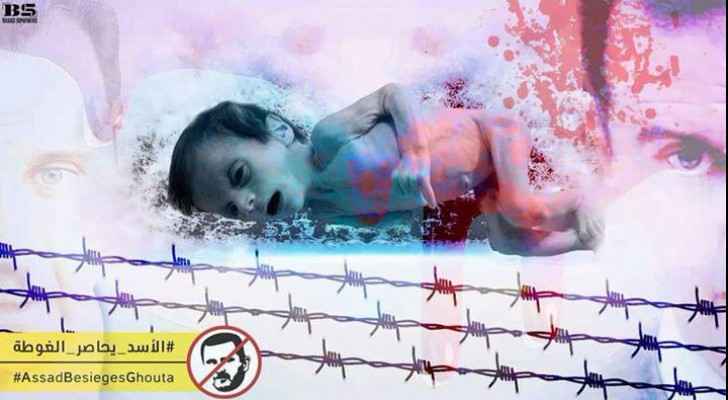 The image of a starving Syrian child, which went viral on social media on Monday, has revealed the miserable situation in which hundreds of Syrians are suffering from in the eastern Ghouta.

“Many children are suffering from defects, headaches, vision problems, depression and psychological problems. All this comes from the lack of basic nutritional and essential energy sources that the child must have daily,” Yahya Abu Yahya, a Doctor from eastern Ghouta, told Al Jazeera.

Forces aligned with Syrian president Bashar Al Assad blockaded the city since December 2012, preventing food supplies from entering Ghouta and leading to the death of many children from malnutrition.

Most of the city’s healthcare facilities were destroyed and almost non-operational, intensifying the already dire situation.

The death of the 30-day-old girl from malnutrition is the third case to occur in the latest four days.

"Infant death rates have dramatically increased due to lack of milk and not enough food," the Eastern Ghouta media centre said in a statement.

Nearly 400,000 people live in besieged parts of Syria, the majority of them are living in eastern Ghouta.

Activists on social media launched a campaign called #AssadBesiegesGhouta, to raise an alarm on worsening conditions in eastern Ghouta.

Eastern #Ghouta has been besieged for years & over 300,000 civilians suffer under this siege. End the siege now! #AssadbesiegesGhouta #Syria pic.twitter.com/lWJ9MQ6HP2

More than 10.000 orphans because Assad's genocide!!!!!
We must stop these massacre!!!!#AssadBesiegesGhouta#الأسد_يحاصر_الغوطة pic.twitter.com/XbVJlJElo8

The 7-year civil war in Syria has killed almost 500,000 people and forced half of Syria’s pre-war population of 20 million to leave their homes, according to UN figures.

Over1,100 children are suffering from acute malnutrition in the besieged rebel-held Eastern Ghouta area outside the Syrian capital, the UN's children's fund UNICEF told AFP on Monday.