The helicopter has a glass cockpit with liquid crystal sensors. (YouTube) 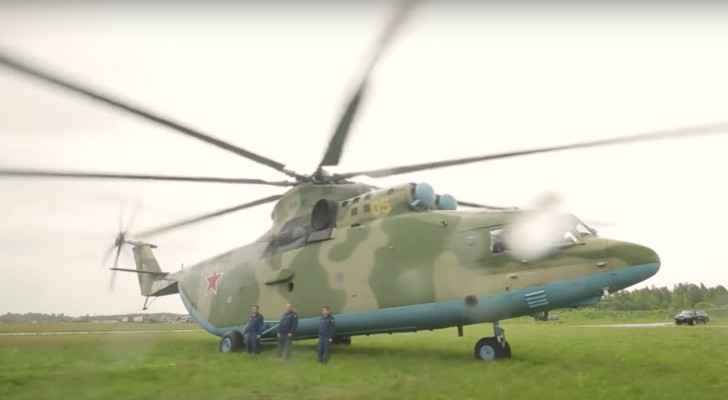 The Russian city of Rostov has launched air tests for the world's most powerful transport helicopter, Mi-26T2, which is capable of transporting 20 tons of cargo, Russia Today reported on Tuesday.

Experts said that the new helicopter was manufactured for export to Jordan, according to an agreement signed in 2016 with Russia. The Kingdom will be receiving four helicopters of this kind, according to BMPD website.

Experts noted that the Mi-26T2 model is unique in its technical specifications. These helicopters can carry out a wide range of tasks, including transport, evacuation, fire suppression and others.

The Mi-26T2 has two main fans with eight blades and a five-ring background. It is equipped with two engines, each generating 11,400 horsepower.

In contrast with its previous version, the helicopter has a glass cockpit with liquid crystal sensors, fitted with a digital autopilot and a navigation system supported by the Navstar and GLONASS satellite systems, allowing the crew to be reduced from five to three members.

14 dead in military helicopter crash in ....