The statue of the Greek god Zeus, discovered in Jerash. (Facebook: Lina Annab) 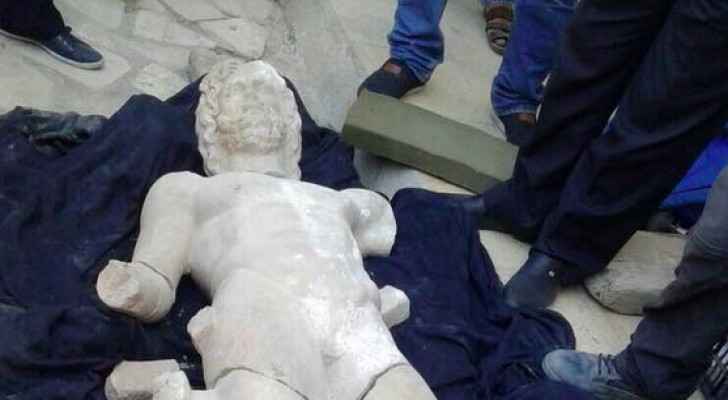 An entire human size statue of the Greek god Zeus was discovered recently in the "Eastern Great Baths," on the eastern side of the existing Roman city in Jerash.

The statue of the Greek god Zeus, the ruler of the Olympian gods, was completely discovered completely intact on the 12th of October, Lina Annab, the Minister of Tourism & Antiquities, said in a Facebook post.

Another seven pieces of considerable-size stone statues were also discovered during the past year. Among the discoveries was a huge one of Aphrodite, the Greek goddess of love and beauty, which measures over 3 meters high.

The seven pieces of the stone statues are believed to originate from the second century AD.

The exciting discoveries were part of excavation work conducted by an archaeological French-German mission, in coordination with the Department of Antiquities.

Annab also expressed Ministry’s interest in these archaeological findings and the need to take care of them, stressing the importance of displaying them in the Jordanian museum in Jerash.

“The wonderful stories one encounters about our history everywhere we go in Jordan are telling of a land that welcomed continuous civilizations whose traces and stories are visible all around.” Annab noted.