The US Embassy in Ankara, Turkey. (Wikimedia Commons) 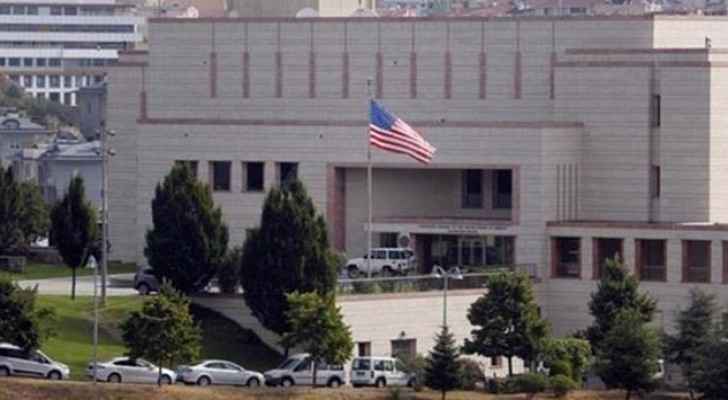 Turkish President Recep Tayyip Erdogan has described the US embassy's decision to suspend all non-immigrant visa operations in Turkey as "saddening."

"For the (US) ambassador in Ankara to take a decision like this, to put it into practice, is saddening," he said in a joint news conference on Monday with his Ukrainian counterpart Petro Poroshenko in Ukraine's capital Kiev.

Additionally, the leader of the opposition Nationalist Movement Party (MHP), Devlet Bahceli, accused the U.S. of causing a virtual crisis during his party's parliamentary group meeting on Tuesday.

"The U.S. tried to cause a virtual crisis with lame excuses," said Bahceli on the visa suspension.
Describing the U.S. move as "a scandal", Bahceli said that the tension will “deepen the gap between the two countries.”

This comes after the U.S. suspended all non-immigrant visa applications at all U.S. diplomatic facilities in Turkey on Sunday, on the basis that it was reassessing Turkey's commitment to the security of U.S. facilities and personnel.

Turkey retaliated by suspending non-immigrant visa service in the U.S. citing security concerns.
The US move is believed to be motivated by Washington's concern over Ankara's Syria policy, as well as last week's arrest of a US embassy employee who was held over suspected links to a cleric Fethullah Gülen, blamed for last year's failed coup in Turkey.

In its statement on Sunday, the US embassy in Ankara said: "Recent events have forced the United States government to reassess the commitment of government of Turkey to the security of US mission and personnel.

"In order to minimise the number of visitors to our embassy and consulates while this assessment proceeds, effective immediately we have suspended all non-immigrant visa services at all US diplomatic facilities in Turkey."

The latest spat is unprecedented between the two NATO allies, representing a major fallout in bilateral relations.