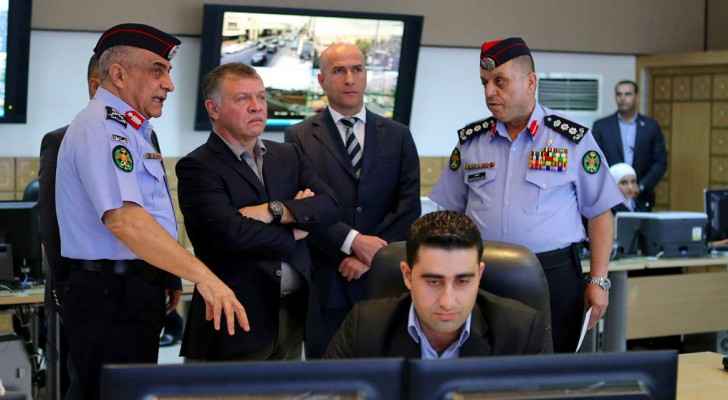 King Abdullah II visited the Public Security Directorate (PSD) on Monday in the wake of Irbid riots, after police violently attacked a university professor in the Jordanian city.

King Abdullah assured that the incident of police brutality, which saw the violent beating of university professor Mohammad Thiabat, was unique and does not represent the overall actions of Jordan’s security force. He added that whoever exceeds the law should be punished.

He added that he was delighted by their role in preserving safety in the Kingdom and stability.

King Abdullah also highlighted the need for the continuous training of PSD members to enable them to carry out their duties in a more competent and effective manner.

On Al Faqeeh’s part, he outlined the latest updates and security events, alongside plans to improve security services for Jordanians and all county residents.

The meeting comes after young men protested in the streets of Ramtha on Saturday evening, after shocking footage circulated on social media showing Thiabat being beaten by Criminal Investigation Department (CID) officers in a restaurant in Irbid.

In January the Adaleh Centre for Human Rights Studies, an NGO based in Amman, reported that at least eight deaths in detention resulting from torture had occurred in the previous two months.

A 2016/17 report by Amnesty International noted that, despite the government signing on to a 10-year national human rights plan that included strengthening legal protections against torture, “it was not clear that any such reforms were made in 2016.”