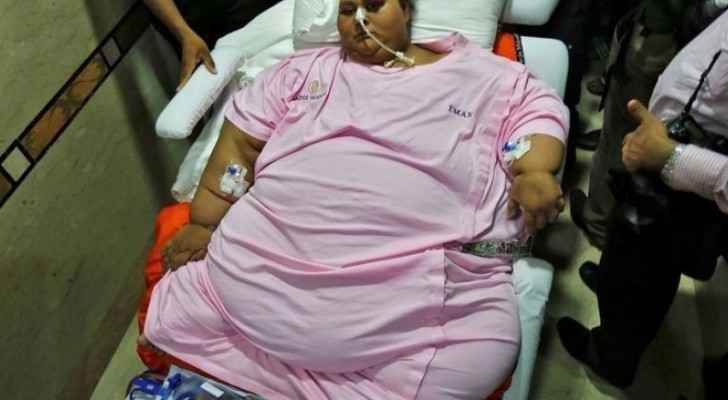 El Aty, 36, was receiving treatment in an Abu Dhabi hospital before complications surrounded her condition.

According to The National, the Egyptian suffered from a rare thyroid condition which led her to weigh 500kg.

The disease resulted damage in her heart, kidney and respiratory system.

“Her problem was not just obesity, as she also had serious comorbid-related health conditions, with her heart and kidneys, said Dr Nabil Debouni, medical director of Burjeel Hospital.

El Aty, was transferred from a hospital in Mumbai, India, where she shed about 300 kg after undergoing an extensive bariatric surgery.

Saifee Hospital was later accused of using her case as a publicity stunt to boost medical tourism in the country.

She was then transferred to the UAE in a special chartered Medivac flight and began her recovery.

Twenty healthcare staff were assigned to her program, including nutritionists, physiotherapists and psychologists, The National reported.

Specialists were consulted over the possibility of EL Aty walking again, which she was not able to do for years.

El Aty was making progress, until her condition began to deteriorate on Friday.

After her vital signs including her respiration and blood pressure started to deteriorate, El Aty passed away leaving doctors in shock of such a sudden change in her health.