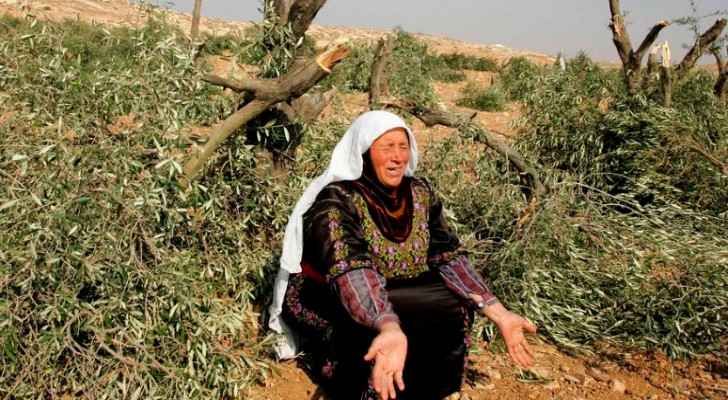 A grove of olive trees on a private Palestinian land was set on fire Sunday Morning by Israeli settlers, according to Maan news.

This comes after Israeli forces evacuated an illegal settlement outpost in the area.

According to a spokesperson for a human rights organization working in the occupied Palestinian territory, the outpost which consisted of three tents and a building south of Nablus city, was evacuated by officers from the Israeli Civil Administration.

In response, settlers torched a number of olive trees belonging to Palestinian resident of Kafr Qalil.

Yesh Din reported on Monday on Facebook that an illegal settlement outpost was set up about two months ago on the land, located a few hundred meters from Kafr Qalil.

The outpost was subsequently taken down by the Israeli army, but two days later, three tents were erected in the same location, and as of Monday there was a building set up by the settlers.

Yesh Din, human rights organization, highlighted that its documentation of "ideologically motivated crimes" committed by Israeli citizens against Palestinians in the occupied West Bank, has "revealed that the existence of unauthorized outposts creates growing circles of violence against Palestinians living and farming in the vicinity."

According to Maan, Yesh Din documented that eight fruit trees were uprooted near the illegal Israeli settlement of Yitzhar, located south of Kafr Qalil, and that days after that, 12 olive trees belonging to a Kafr Qalil farmer were chopped down.
The group said that Israeli forces had not apprehended any suspects over the incidents.

Many Palestinian activists and rights groups have accused Israel of fostering a “culture of impunity” for Israelis committing violent acts against Palestinians, Maan reported.