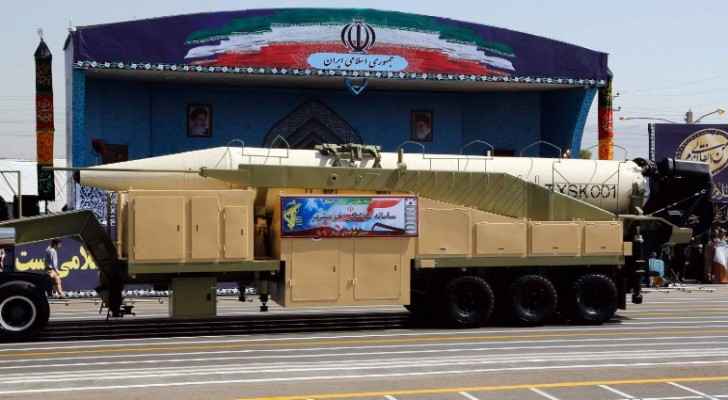 Iranian state television has released footage of what it states was a new mid-range ballistic missile, successfully launched from an undisclosed location.

The missile, dubbed "Khoramshahr", can carry multiple warheads and travel up to 2,000 km, according to state media. News of the test came hours acter Iran's Revolutionary Guard hosted a military parade in the capital of Tehran.

The move is deemed as a direct challenge to US President Donald Trump, which is highly critical of the lauded Iranian nuclear deal signed under the Obama Administration. Last month, th Trump administration signed a bill which imposes mandatory penalties on anyone involved in the ballistic missile programme as well as any business dealings.

Although Iranian media has stated several times that the country possesses such missiles in its arsenal, this is the first time the Khoramshahr missile was displayed to the public.

"We will strengthen our defence and military capabilities ... whether you want it or not," stated Iranian President Hassan Rouhani, as a direct response to Trump's speech at the UN General Assembly this week.

Rouhani stated that Trump is only seeking excuses to pull out of the historic 2015 nuclear agreement, which capped Iran's nuclear activities in return for lifting international sanctions.

According to Al Jazeera, the deal between Iran and world powers does not strictly prohibit the Persian country from developing missiles. After agreement came into effect however, the UN Security Council adopted a resolution which calls for Iran to halt any actions related to ballistic missiles which are capable of delivering nuclear weapons.

Tehran argues that the tests are solely for defensive purposes, noting its compliance with the UN Security Council as it is not developing missiles specifically designed to carry nuclear warheads.

US withdraws from nuclear arms treaty with Russia

US withdraws from nuclear arms treaty with ....

US withdraws from nuclear arms treaty with ....

US withdraws from nuclear arms treaty ....