Instagram travel photographer stars talk the good, the bad and the ugly in Jordan

Instagram travel photographer stars talk the good, the bad and the ugly in Jordan 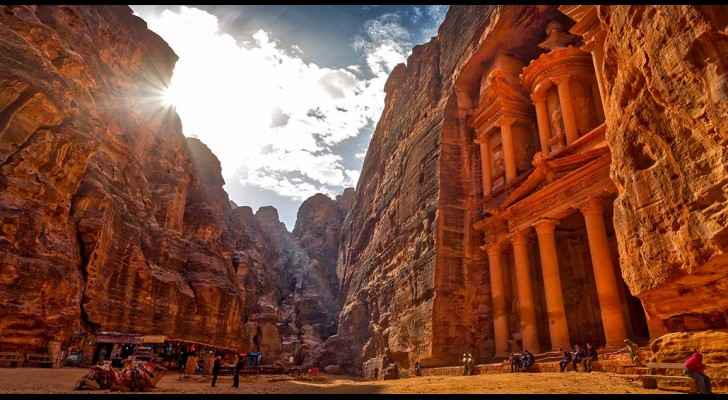 Eric Rubens, Aaron Brimhall and Rob Strok did not travel to Jordan for the hummus. Had they known how delicious it is, they probably would have.

If it wasn’t for the hummus, what brought the trio to this part of the world?

Jordan attracted them because “it is still under the radar and not cliche in comparison to other places shot and advertised on Instagram.” In fact, Eric’s Dead Sea shot was the third most-liked picture ever on his Instagram page.

This was Eric’s second time in Jordan; Aaron and Rob tagged along for the adventure.

Luckily, they weren’t nervous about visiting the turbulent Middle East, which is why all three of them said they would “definitely return” to the Kingdom.

Here, the boys talk to us about the good, the bad and the ugly aspects of Jordan and photography. 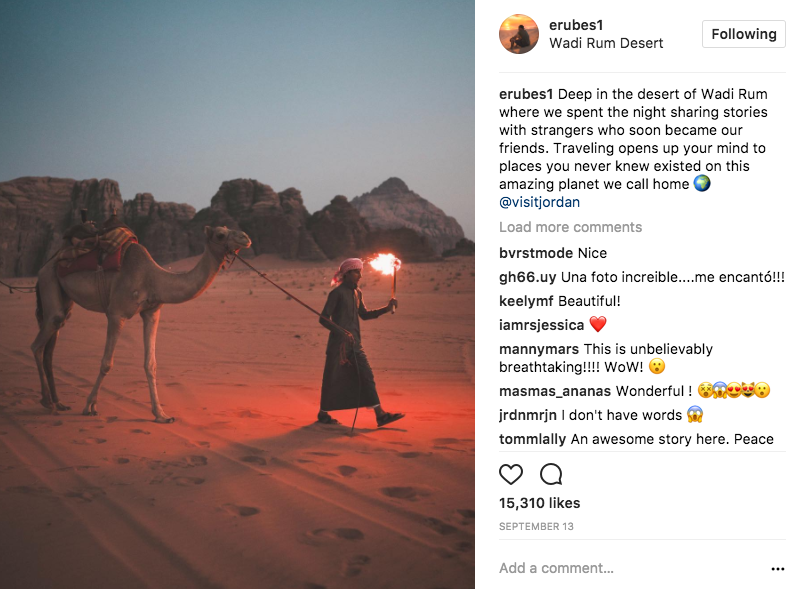 1. Hummus. No seriously, the trio were in full agreement about the deliciousness of hummus in Jordan, describing it as “the best we’ve ever had, anywhere in the world.”

2. Jordanian cuisine was to their liking, so much so that they admitted “the food here is better than anywhere else we have been to...” and they’ve been to more countries than we can count.

3. The photo-hunters noticed that Jordan is all one colour - that’s “tan” by the way - but concurred that the lack of colour posed no problem on their photography because “different is cool.”

4. The photogs felt very welcome everywhere they went, admiring how strangers kindly invited them over for meals and freebies at their homes and businesses.

5. Petra and Wadi Rum-natives were of extreme interest to the photographers, because they told them stories through the eyes of someone who has never left the country.

1. The heat was unbearable for the Americans, who couldn’t understand how we could bear it. We assured them that Jordan enjoys four seasons in all their glory.

2. Aaron joked that they ate hummus for breakfast, lunch and dinner, and his friends questioned the lack of food diversity.

3. Eric was upset that, for the first time ever, he had to travel without his drone because he couldn’t get a permit to use it in Jordan. Local filmmakers told him that using a drone without a permit will land him in jail.

4. Eric was sad to see young kids working and selling rocks in Petra.

1. Eric said that while he felt safe here, he was uncomfortable “advertising” his American nationality.

2. The boys were very surprised at how “expensive” shopping in Amman is. They said the prices here were just like back home.

3. The guys tried smoking shisha, but as non-smokers, they felt suffocated by the smokiness of Jordanian venues. They were puzzled that almost every single person they came across was a smoker. 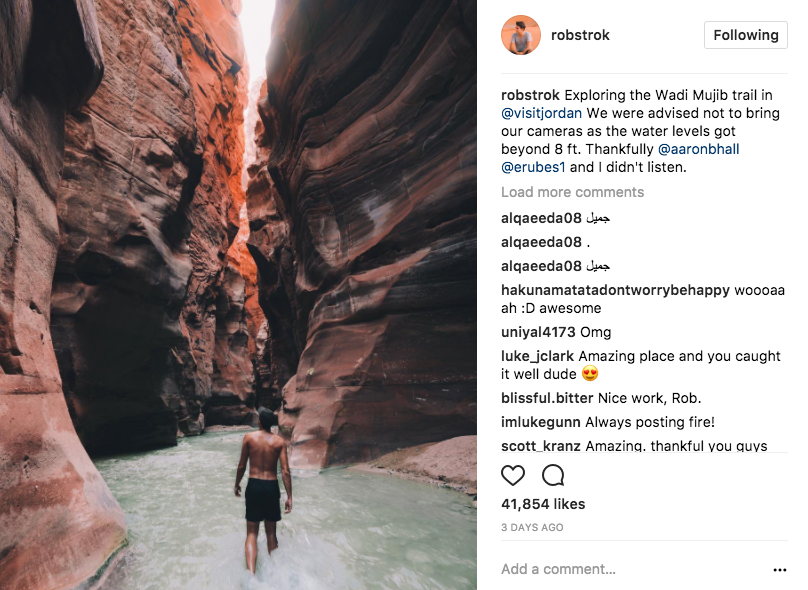 1. The Instagram stars believe that the secret behind their large social media following is their “different, outside-the-box and fresh” style of photography. They’ve found a niche and stuck to it.

2. Behind-the-scenes work requires hours of research for each location, including what will be shot, how it will be shot, what fresh angle can be taken and much more: that is the secret to their success.

3. The wonderful thing about having many followers, according to Rob, is that he has friends and hosts worldwide (also, he wouldn’t have met Eric and Aaron if it weren’t for Instagram).

4. Aaron and Rob love their Canon cameras. Eric loves his Sony camera. They humorously teased Eric about not using Canon.

5. The photogs said that if they were to shoot the same thing, it’s the editing that would separate their photos from one another.

1. Travel photography requires taking risks for that perfect shot, which has landed these guys in trouble many a time. From falling off a donkey’s back to getting caught on the forbidden rooftop of some building, Eric, Aaron and Rob indeed “push the limit.”

2. It’s unfortunate, they say, that they can’t post every shot they see as beautiful, because Instagram is a business for them and they must share the images that will “engage the audience and sell a certain emotion from that photo to the people, that’s different to the emotion the photographers have lived," which they felt was represented in another shot.

1. The more followers the photographers got, the more careful they had to be about what images landed on their Instagram pages. Social media users are easily offended, whether it be animal rights activists, who wouldn’t want to see Eric riding a donkey, or those who would object to seeing one of the boys eating meat. 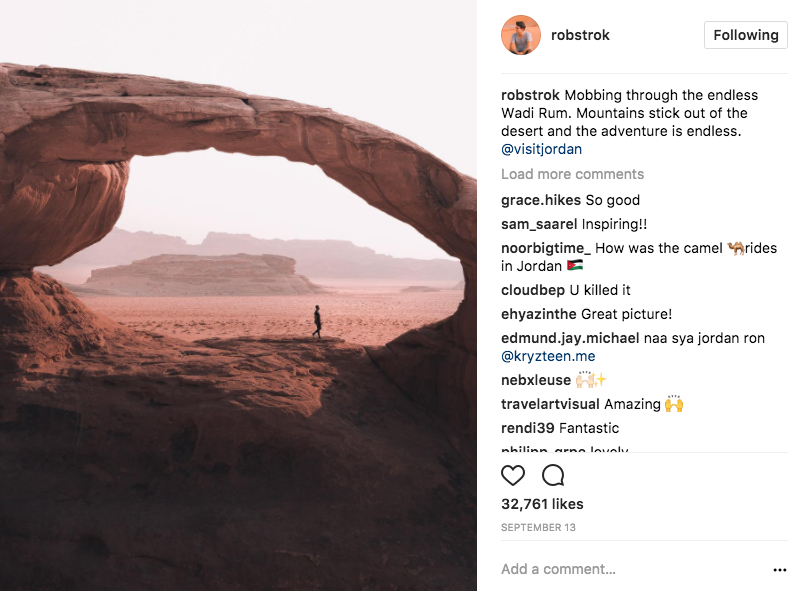 Technology is fast-advancing, and these photographers dream of using new tech in their work.

Eric dreams of using cameras that function more brilliantly at night and in poor lighting. He also wishes to one day be able to take amazing shots without having to use a tripod.

Rob hopes that the heavy gear he has to carry everywhere will get much smaller in size and lighter in weight. 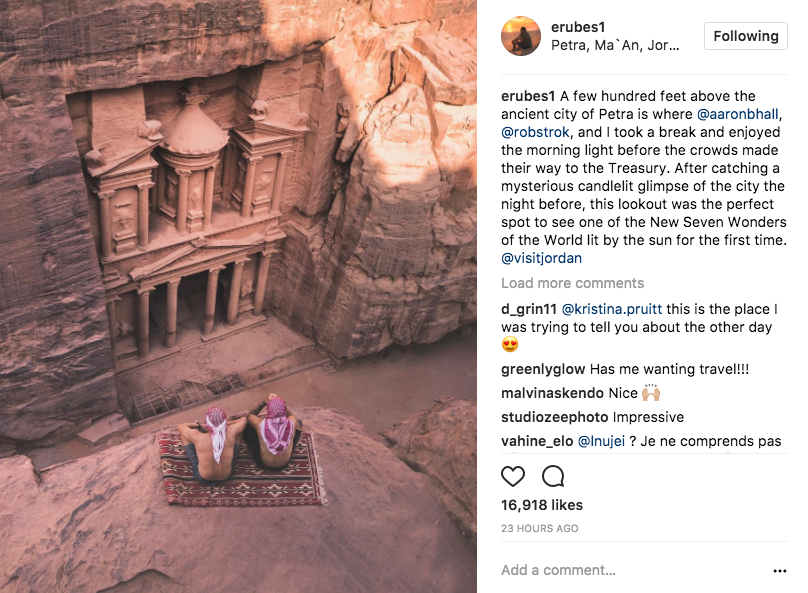 The professional photogs advised aspiring travel photographers to “find a niche and stick to it.”

As for the Jordanian Tourism Board, they encouraged them to work on emphasizing just how safe Jordan is to potential tourists, as many of their followers seem to have questioned the safety of the Kingdom because they are uneducated about it.

To “follow” Eric, Aaron and Rob around the world, visit their Instagram pages by clicking on the handles below.