The two ministers in Paris. 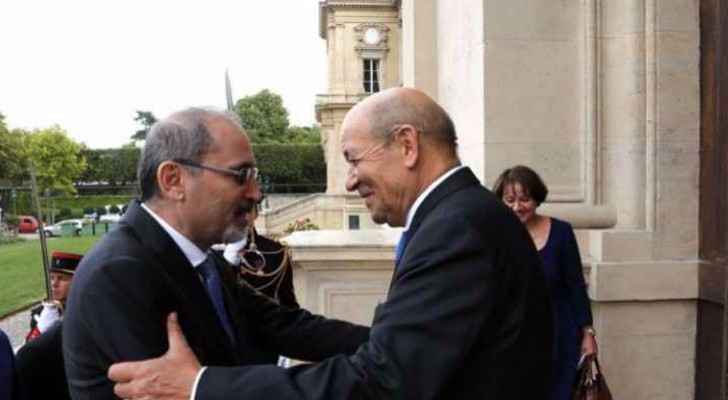 Ayman Al Safadi, Minister of Foreign Affairs, met with his French counterpart Jean-Yves Le Drian in Paris today, where they agreed on improving bilateral cooperation and increasing political and security coordination between the two countries.

The two ministers discussed means of improving cooperation between the two countries, based on the goals set by King Abdullah and French president Emmanuel Macron in their meeting in June.

They stressed the importance of enabling and enforcing economic and commercial cooperation to achieve peace and stability in the Middle East.

The meeting, which was attended by the Jordanian ambassador in France, had the ministers reviewing recent developments in the Palestinian case, and the importance of relaunching negotiations between Palestinians and Israelis to find a solution for the Palestinian-Israeli conflict.

The ministers also reviewed the latest developments in the Syrian crisis and the war on terror, stressing the commitment of both countries to fighting terrorism, and the importance of finding a political solution to the Syrian crisis.

Safadi then talked about the recent talks between Jordan, Russia and the United States regarding the de-escalation zones in South Syria, which helped establish a ceasefire in the Syrian south.