An IS convoy was travelling to Lebanon-Syria border to Deir Ezzor. (Wikipedia) 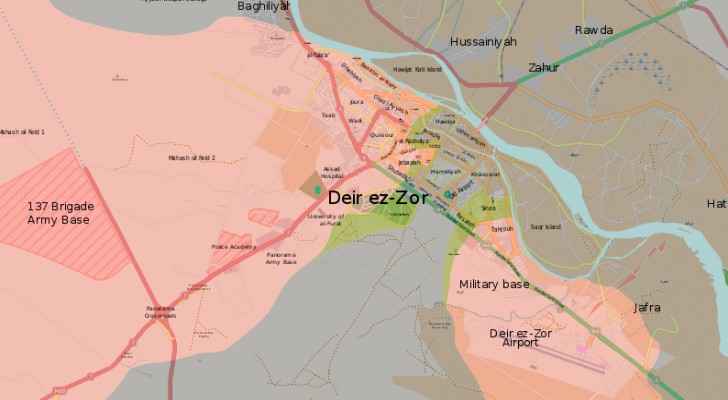 The convoy carrying hundreds of IS fighters and civilians was intended to travel from the Lebanon-Syria border to jihadist-held territory in eastern Syria, under a deal Hezbollah helped broker.

However, US-led coalition pounded the road to Deir Ezzor with air strikes, blocking the convoy from reaching the IS-held town of Albukamal on the Iraqi border.

According to Hezbollah, who defended the deal to remove IS fighters from the Lebanese frontier, US-led forces had stranded most of the convoy's 17 buses in the Syrian desert beyond government reach.

"They are also preventing anyone from reaching them even to provide humanitarian assistance to families, the sick and wounded and the elderly," the Hezbollah statement said.

However, the coalition said that it and Iraq were not part of the deal and on Tuesday bombed the road ahead of the convoy.

"The coalition will not condone ISIS fighters moving further east to the Iraqi border," the coalition said in a statement.

"Relocating terrorists from one place to another, for someone else to deal with, is not a lasting solution," it added.

This comes as local media reports an upcoming battle between ISIS and units from the Syrian Arab Army (SAA) and Hashd Al-Sha’abi (Iraqi paramilitary), as the extremist group advances towards Deir Ezzor.

The Syrian Armed Forces and their allies have reportedly positions themselves within 16 km of Al-Shoula, the last major town located directly west of the Deir Ezzor Governorate’s provincial capital.

In the coming weeks, the battle for Deir Ezzor is expected to reach a critical juncture.

Deir Ezzor has been under seige since 2014, when ISIL launched a large-scale offensive against Syrian rebel forces and gained control of most of the governate.

Syrian refugees found frozen in Lebanon after trying to ....