King meets with officials from Jerash

The King as he met with Jerash officials in the Royal Hashemite Court today. 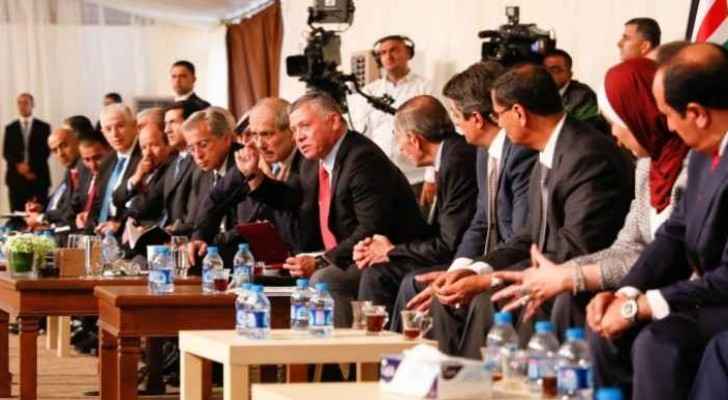 The King congratulated and thanked all those who participated in the Municipal and Decentralized elections last week, especially the Independent Election Commission (IEC) and its staff, who worked, as the King said, ”with utmost transparency and devotion in managing the electoral process.”

He said that there are huge responsibilities ahead of the new municipal and provincial councils in assigning priorities for their respective governorates and municipalities.

“To all those who succeeded, work for improving the financial situation and laying down strategies for governorates begins today,” the King said.

He said that he wished Decentralization would benefit Jordanians, through improving the quality of the service provided to citizens, and achieving fairness in the distribution of development, stressing that the coming stage will require cooperation and teamwork from all.

The King added that the Government should invest in Governorates through cooperation with the Parliament, Municipal Councils, and Provincial councils.

He said that he is reviewing means of reviving Palestinian-Israeli peace talks with a team from the American administration, stressing the peace process’ importance for Jordanians.

He confirmed that the northern borders of the Kingdom are under Jordanian control, expressing his confidence in the Jordanian Armed Forces in dealing with any threats.

King in interview with Hoover Institution: ....

King in interview with Hoover Institution: ....

King in interview with Hoover ....