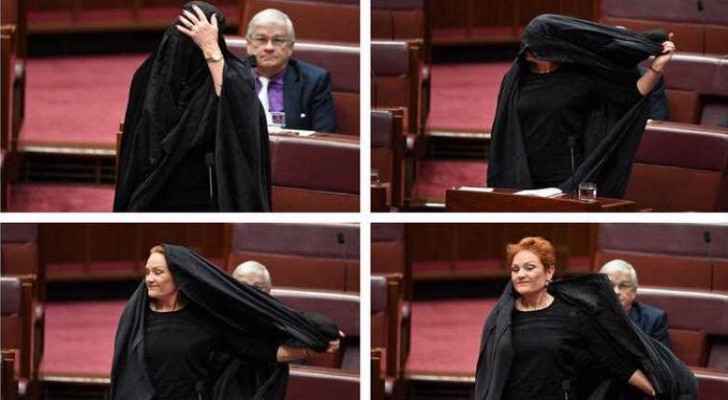 Far-right Senator Pauline Hanson of the One Nation Party, dubbed as the "Australian equivalent to Trump" by some critics, made headlines during a recent stunt in Canberra.

Hanson, in a campaign to ban burqas from Australia, entered the Senate chamber in the Australian capital wearing a burqa, as part of her campaign against the all-enveloping garment worn by some Muslim women.

Both the campaign and stunt quickly drew rebuke from government and Muslims, according to Reuters.

She sat at her seat in the assembly for roughly 20 minutes, wearing a burqa before removing it and calling for its ban due to "national security reasons".

"I'm quite happy to remove this because this is not what should belong in this parliament," she told the senate. "If a person who wears a balaclava or a helmet into a bank or any other building, or even on the floor of the court, they must be removed. Why is it not the same case for someone who is covering up their face and cannot be identified?"

Attorney-General George Brandis said "I am not going to pretend to ignore the stunt that you have tried to pull today by arriving in the chamber dressed in a burqa," gaining applause from the Senate. "We all know that you are not adherent of the Islamic faith. I would caution and counsel you with respect to be very, very careful of the offense you may do to the religious sensibilities of other Australians."

Vice president of the Islamic Council of Victoria Adel Salman, echoed Attorney-General Brandis's statement: "It is very disappointing, but not surprising as she has sought to mock the Islamic faith time and time again."

Hanson's One Nation Party has four seats in parliament, which gives it some influence in cases where legislation is closely contested.