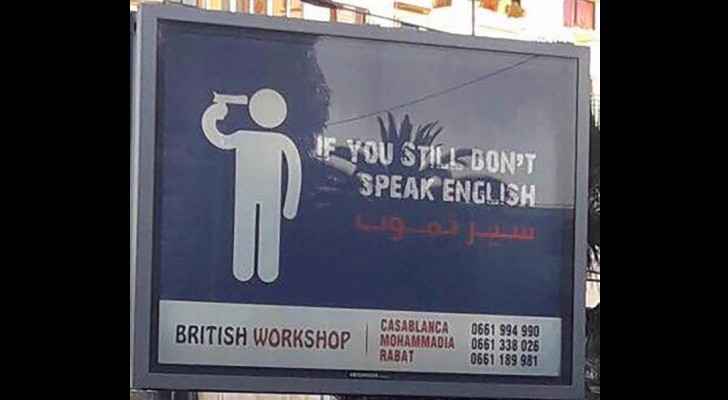 If you live in Morocco and still can’t speak English, “go kill yourself.”

That’s what one billboard ad bizarrely told passersby before on Friday it was removed by popular demand.

The ad, placed by private English school British Workshop, clearly missed the mark when it came to its “British sense of humour.”

“Obviously, some people interpreted it differently. Therefore, the ad will be removed tomorrow,” the school wrote on their Facebook page last Thursday.

While Moroccans were infuriated by the major advertising faux pas, Elisabeth Myers, communications and branding expert and US-Morocco-based lawyer, was less lenient towards the school.

“This billboard certainly accomplished more perhaps than the language school intended, as it has everyone talking about it now,” she told Morocco World News.

“In this day and age of information overload, sometimes marketing has to go over the top to get people’s attention. The stark messaging in this ad does just that, and it’s powerful. It uses an idiom of Moroccan culture to say: Learn English or there is not much point in living.”

She added, “It’s simply advertising. While it may be distasteful and certainly not amusing, no one can seriously take this as a call for suicide.”

Suicide is a serious problem affecting thousands of people in Morocco every year.

According to data from the World Health Organization, suicide rates skyrocketed from 2000 to 2012, increasing by a factor of nearly 100 percent.