Mohammed Abdullah Al Saadi stands by the entrance of his home in Al Ramtha, which was hit by an errant missile in February. (Roya) Mohammed Abdullah Al Saadi and his family finally felt safe once they fled from their home city of Damascus, Syria, and settled in Jordan’s border town of Al Ramtha in 2012. As a Syrian refugee, he was prepared for the many challenges that lay ahead for his family, but what Saadi did not expect was for the very civil war he escaped to spill over into his life in Jordan.

“The shell fell in my backyard, right through my pear tree,” Al Saadi explained, sipping coffee on the floor of his guest room with his wife, aunt, and sister. “I was out getting groceries, and as I stepped through the door, I saw something coming towards me. I could not hear anything, and the force was strong enough to throw me out of the house and leave me on the floor.”

Saadi’s house in Ramtha is a white, two-storey building with a large courtyard, spotted with olive and passion fruit trees. Makeshift swings hang from the branches for the children to play on.
It was in this courtyard that a stray shell from Syria’s Dara’a province fell in February this year, ripping one tree from its very roots, shattering windows, and tearing the water pipes from the walls.

“I escaped war, but it followed me here,” Saadi said, as he stood by the remains of his pear tree, pointing out the damage from where the shell struck.

The Al Saadi family’s experience is not unique. While Jordan is often depicted as an ‘island of tranquility amid a sea of conflict,’ the waves of Syria’s war continue to flow over onto the coast of Ramtha. 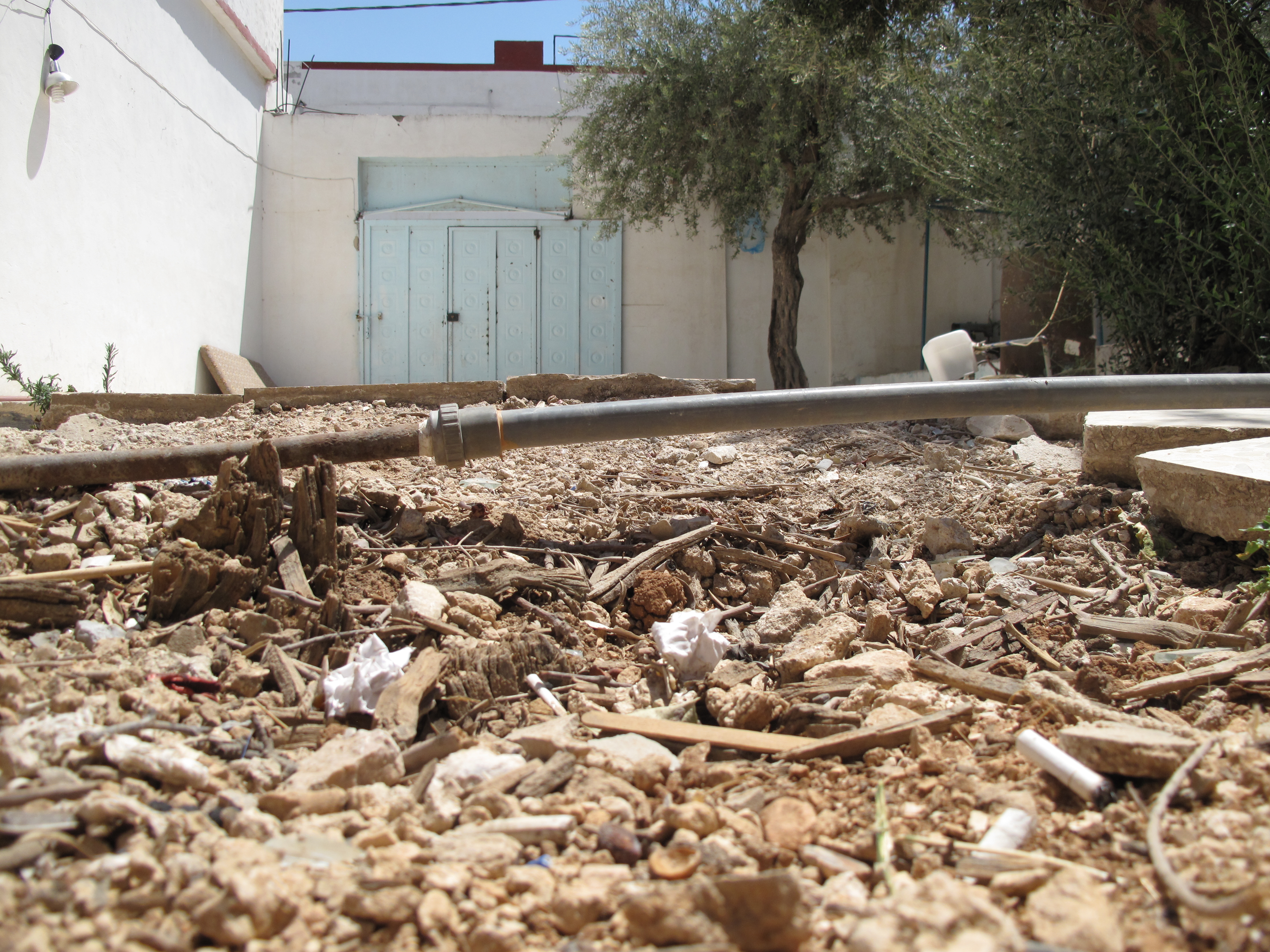 Ramtha, in the Jordanian governorate of Irbid, is only a few kilometres from the southern Syrian province of Dara’a, where fighting between regime forces and opposition factions has been ongoing since the start of Syria’s 2011 civil war.

The border town is often referred to as the twin city of Dara’a. In the past, people and trade would flow freely between the two cities, with a shared history and sociology. Now, the shared experience is one of war. As the battle wages on in Dara’a, the birthplace of the 2011 Syrian uprising, Ramtha’s residents can gauge the intensity of fighting from the systematic sounds of bombing and the level of trembling beneath one’s feet.

The US-Russian truce, announced on July 9th, has meant that for the meanwhile, Ramtha residents have been experiencing a period of relative calm, as tensions decrease on the other side of the border. “Regime aerial bombardments in Dara’a seem to have ceased, which, in contrast to the period preceding it, is a very notable improvement,” a member in the South Syria Emergency Response informed Roya.

However, even in times of moderate stability, the sense of war cannot be escaped. Just last week, on the morning of August 8, Ramtha trembled violently, encountering the impact of an explosion of a Syrian army weapons depot across the border. The blast was so powerful, it could be felt all the way in Irbid city, 24.5 km from the border. 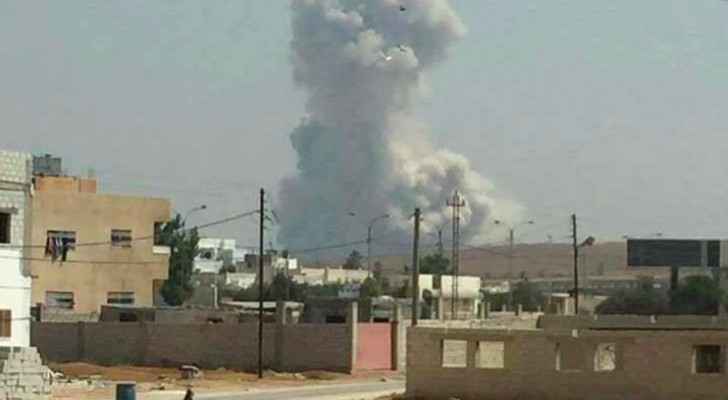 Alongside the sounds and tremblings of war, locals confirmed to Roya that stray mortar shells and errant missiles from Dara’a fall with regularity inside Ramtha, and have reportedly hit homes, schools, and government offices.

Precise documentation on the rate of the shellings is hard to come by. Roya spoke with the Governor of Irbid and local community organisations, none of whom could provide insight into the precise number of stray shells and errant missiles to have hit Ramtha since the start of Syria’s war.

According to locals, the intensity ebbs and flows, depending on the situation of Dara’a ongoing battle. In the month of June, 2015, local news reported up to 25 stray shells falling on Ramtha.

However, while the frequency of the shelling has varied throughout the six years of civil war, residents remain on high alert, and a sense of anxiety cloaks the town, with many having reported “sleepless nights” over periods where the bombing intensifies and the clashes approach the border.

Students are often forced to leave school early when the the neighbouring battle intensifies, and many living particularly close to the border have felt pressured to leave their homes and move to the city centre out of fear for the safety of their families. One local MP told the Jordan Times that people in Ramtha have launched a campaign on social media networks and a local news website to find hosting families for fleeing residents living directly on the border.

Unlike Al Saadi, whose family escaped with their lives, Thiabat’s son was not so lucky.

In June 2015, 23-year-old Abdul Munem Al Hourani was killed, and several others injured, when a bomb hit his uncle’s shop. A student of engineering at the Jordan University of Science and Technology, Al Hourani had been working with his uncle when he was hit by stray shrapnel and died later in hospital.

His mother remembers the sounds of bombings echoing clearly in the sky on the day her son was killed, but Ramtha’s residents could not have predicted the devastating consequences of a war that was not even their own.

Thiabat speaks softly as she sits in on the floor of the family home in Ramtha, her face fixed in grief. “My eldest son came to my room and told me that Abdel Munem was martyred. I could not understand it. I told him: ‘This does not make sense, Jordan is not going through war’,” she told Roya.

At Al Hourani’s funeral, the streets were flooded with thousands of Ramtha residents, many angry and seeking revenge for his senseless death. However, Hourani’s family have advocated for peace and stability among the town’s residents, emphasising the need to ensure the safety of Jordan.

“Men in our family and his [Al Hourani’s] friends wanted revenge, but my husband told them that if they loved him, they would calm down and focus on their education,” Thiabat said. “A lot of people came to us and tried encourage us to get revenge for our son, but we never listened to them. The safety of Jordan was a priority of ours.” 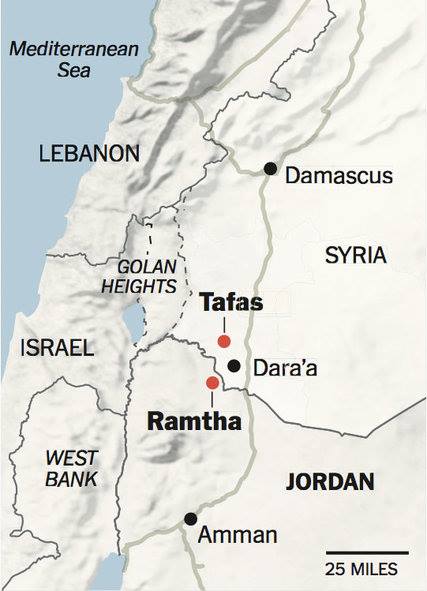 Despite the unease among civilians as fighting continues across the border, a top government official stressed that the country’s borders from the Jordanian side are safeguarded. While little can be done to prevent stray shrapnel landing in the city, Jordan’s forces have ensured that no ground fighting has spilled into the Kingdom.

“Borders are protected by our side only,” Government Spokesperson Mohammad Momani told The Jordan Times in February this year, adding that “we stand together to face the challenges caused by the security situation in Syria”.

The 370km border line with Syria is “tightly safeguarded by the Jordan Armed Forces-Arab Army”, added Momani, who is also minister of state for media affairs. “We are capable of deterring any threat.”

However, some locals feel the government could be doing more to help those whose daily lives have been turned upside down since the start of the war. “We are asking the government to secure our safety and to react against the effects of the Syrian war,” Al Saadi said.

For the mother of Abdul Munem, her only hope is for the memory of her son to live on.

“We never received any kind of support, but we are not even asking for support,” she said. “We only want our son to be remembered. I only hope for officials to name a school, a building, a circle, anything, after him.”