A copy of the Israeli guard's diplomatic ID. 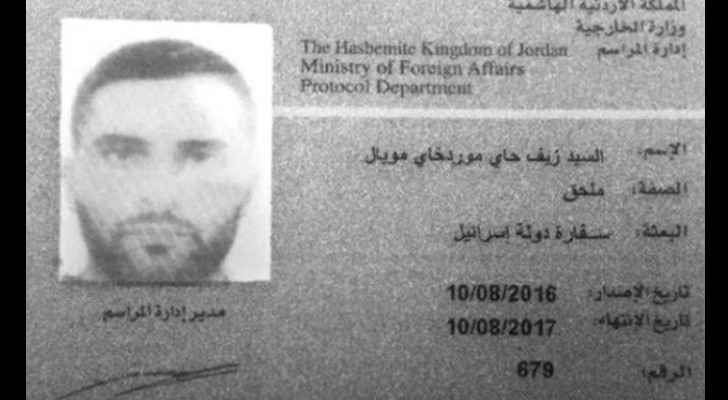 The Israeli guard who murdered two Jordanians at the Israeli Embassy in Amman just over a week ago has gone into hiding with his family in Israel, after Jordanian newspaper Al Ghad published a copy of his diplomatic ID.

Israeli sources reported that the guard, now confirmed as 28-year-old Ze’ev Moyal, and his family had to flee their home and take refuge with relatives after a copy of his ID, with his picture and name, was made public on Monday.

One of Moyal’s neighbours told Israeli news site Ynet: “I’m terrified. I’m sure they’re going to come here for revenge to harm the guard’s family and the town’s residents.”

He added that “the entire town is living in fear,” despite not releasing the name of the town he hails from.

Meanwhile, the town’s mayor said that Moyal’s home is under strict surveillance and security.

An Israeli source said that releasing Moyal’s details is “proof that Jordan is looking to escalate the situation” and that “they are trying to force Israel to punish the guard.”

Jordan charged Moyal with murder, which sparked a major diplomatic row between the two countries.

Jordan’s King Abdullah II said that Israel’s handling of the Embassy incident will have direct repercussions on Jordanian-Israeli ties.

“The Israeli Prime Minister is obliged to commit to his responsibilities and to take the necessary legal actions which include putting the killer on trial to attain justice, instead of dealing with this crime as a political display with the intent of achieving personal political gains. This sort of antagonistic behavior is rejected on all fronts, and it infuriates all of us. It only serves to destabilize security and to feed extremism in the region, and that is unacceptable,” said the Jordanian monarch.