Egyptians line up to ask questions at the Fatwa booth. (Sada ElBalad) 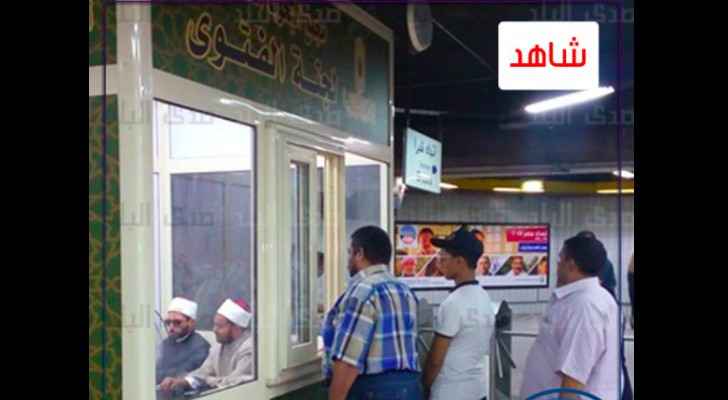 The next time you’re headed from A to B on the Cairo Metro and you have a burning question that just can’t wait until your next stop, why don’t you pop into the new “Fatwa Booth” at Cairo’s Downtown Al Shohada station!

The kiosk has two dedicated Al-Azhar Sunni Clerics on duty, ready to answer whatever is keeping you as curious as George.

Surprisingly, 142 people visited the booth on its first business day, according to the Al-Azhar News.

“The response from the public has been overwhelming. There is a real hunger for knowledge about religious matters,” Sheikh Ahmed Ramzy, the second cleric, told Al-Monitor.

The new service (or craze) is just one of many other booths planned to be installed in metro stations across the Egyptian capital.

While Sheikh Ramzy has high hopes for the new project, social media users’ reactions have been far from positive.

According to Scoop Empire, citizens were “quite worried about bringing matters of religion to public transportation areas.”

However, Ahmed Abdel Hadi, the official spokesman for the Metro Company, put their minds at ease by telling Egyptian newspaper Youm7 that “the fatwa stalls aim at countering radical thoughts. The clerics hope to modify extremist ideologies by answering citizens’ questions.”

Oxygen concentrators do not affect ....