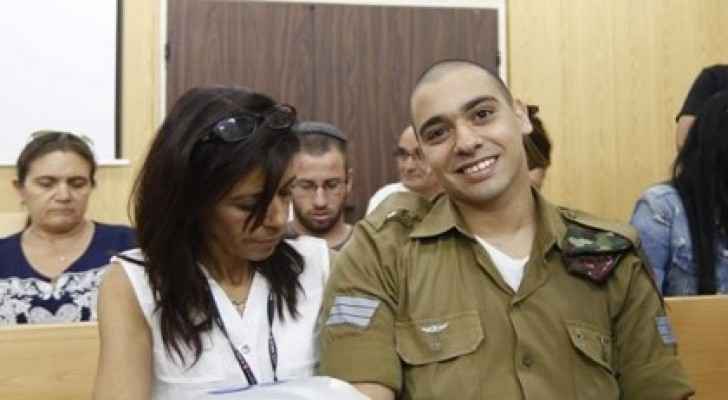 An Israeli court on Sunday upheld the manslaughter conviction and 18-month sentence of a former Israeli soldier who shot dead an injured Palestinian in Hebron in 2016.

While Azarya's defence team appealed the conivction and sentence as "too harsh", the Israeli military prosecutor appealed to increase the 18-month sentence.

The judges presiding over the appeal court ruled to uphold the manslaughter conviction, noting that "The punishment is on the lower edge of appropriate sentencing," while expressing dismay that "such an excelling soldier committed such a terrible error."

The court also noted that the former soldier had "never expressed remorse or questioned his actions", citing this as a primary reason for upholding the sentence. Israeli newspaper Haaretz said that Azarya had only served nine days behind bars, instead spending most of his detention confined to a military base.

Despite the expectation that he would be transferred to a military prison following the court's decision, Azarya’s legal team could further steps in an attempt to evade the sentencing, Haaretz reported.

His lawyers could take the case to the Israeli Supreme Court, or approach either the Israeli army's chief of staff or Israeli President Reuven Rivlin to request a reduced sentence, or even a pardon.

Any reduction in sentence or pardon would be contingent on Azarya publicly taking responsibility for the killing of Al Sharif, Haaretz reported.

The prosecution had also appealed the verdict, claiming that Azarya’s sentence was not congruent with the ruling of the judges, who had given a detailed refutation of nearly every claim made by the defense team when they convicted him, and accepted the prosecution’s argument that the soldier committed an "unjustified revenge killing", Ma'an reported.

The defence, however, had argued that the former soldier has been "unfairly targetted" and that his sentencing represents a "selective enforcement of the law," according to Human Rights Watch (HRW).

HRW said in June that there is "an atmosphere of immunity from punishment for illegally killing Palestinians" in the Israeli occupation army.

"Responsibility for upholding ethical and legal norms doesn’t rest solely on the shoulders of a single 20-year-old soldier, but also on the senior officials who sent him -- and too many others -- the wrong message regarding the use of deadly force," the rights group added.

Al Sharif was shot and seriously wounded in Hebron after allegedly stabbing another Israeli soldier. Though he was left bleeding on the ground for around ten minutes, Azarya can be seen in video walking up to Al Sharif and shooting him in the head at close range.

A number of witnesses quoting Azarya as saying "This dog is still alive," and "This terrorist deserves to die" before he pulled the trigger, Ma'an reported.

The case had attracted criticism, with some accusing it of being a "show trial", by focusing on the case to distract from a wider culture of impunity within the Israeli occupation forces.

The decision to charge the former soldier with manslaughter was also criticised, with rights groups calling the killing an "extrajudicial execution" and the victim’s family calling it "cold-blooded murder."

Following the announcement of the 18-month sentence, the Al Sharif family said that they were "not surprised" by the lenient sentence -- noting that the soldier received less time in prison than a Palestinian child convicted of throwing stones, Ma'an said.

Azarya was the only member of the Israeli occupation forces to be charged with killing a Palestinian in 2016, despite at least 109 Palestinians being shot and killed by Israeli forces and settlers, according to HRW.

According to rights group Yesh Din, of the 186 criminal investigations opened by the Israeli army into suspected offenses against Palestinians in 2015, just four resulted in indictments, Ma'an concluded.