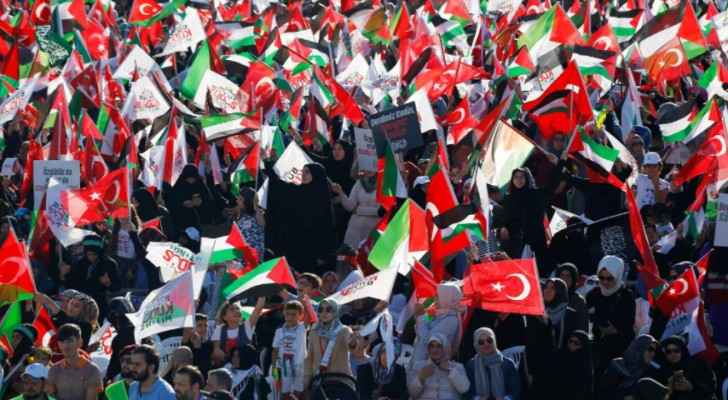 Thousands of people took to the streets in Istanbul on Sunday to protest Israel’s latest security measures at Al Aqsa Mosque compound.

This comes just two days after hundreds of Palestinians, Christians and Orthodox Jews demonstrated outside the Israeli Embassy in Washington DC for the same reason.

Israel had placed metal detectors and CCTV cameras at the entrance gates of the mosque, which led to two weeks of bloody confrontations between Palestinians and Israelis in Jerusalem.

The rally in Istanbul, called “The Big Jerusalem Meeting,” was organized by Turkey’s Saadet Party.

Some 5,000 people were brought in to the rally’s starting point at the Yenikapi parade ground, using buses and ferries from across the city.

Palestinians and Turkish flags were waved in the air, while others held up posters with messages of solidarity for Al Aqsa.

The Chairman of the Saadet Party and representatives from NGOs addressed the large crowd.

“You should know that not only Gaza, but Tel Aviv also has their eyes on this parade ground. Netanyahu does as well, and he is scared,” said Saadet Party Chairman Temel Karamollaoglu, referring to Israeli Prime Minister Benjamin Netanyahu.

Turkish President Tayyip Erdogan had warned Israel that it would suffer most from the Al Aqsa dispute, while accusing them of “inflicting damage on Jerusalem's ‘Islamic character,’ in comments that Israel's foreign ministry called ‘absurd,’” according to Reuters.