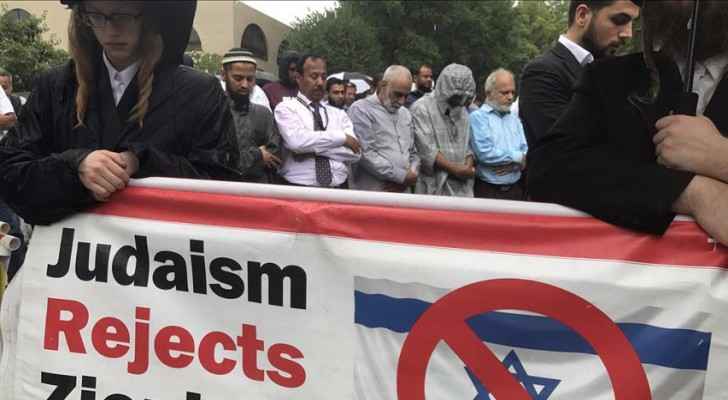 Hundreds of Palestinians, Christians and Orthodox Jews demonstrated outside the Israeli Embassy in Washington on Friday to protest Israel’s closure of Al Aqsa Mosque in Jerusalem.

The protesters also performed Friday prayers at the demonstration organized by the American Muslims for Palestine (AMP).

Rabbi Dovid Felman, president of Jews United Against Zionism, was amongst the protestors:

“We are here because we find that all what Israel is doing for decades against the Palestinian people is totally wrong and this step they are taking out escalate its violence to a level where they just encourage conflict and fuel hatred,” he told Anadolu Agency.

Felman stressed that, according to Judaism, stealing, killing and oppressing are wrong, referring to Israel’s treatment of Palestinians.

“We find today, Palestine the worst place for Jews or for Muslims. unfortunately, all of this was caused by the invention of Zionism and the creation of the state of Israel,” he added.

Standing in solidarity with the Muslims of Palestine, many held banners that read:

“Torah true Jews in Jerusalem and Worldwide condemn the aggression in Al-Aqsa and the occupation of Palestine” and “Judaism rejects Zionism and the state of Israel”.

Meanwhile, AMP National Policy Director, Dr. Osama Abuirshaid, said that the Israeli Embassy in Washington DC does not have the right to take away Palestinians’ freedom of religion and expression, unlike what its government is doing in Jerusalem.

“We will continue to fight against Israel’s injustice in this country until the Palestine and Palestinian people are free,” he added.

Kristin Szremski, AMP’s Director of Media and Communication urged demonstrators to lobby their congressman and the State Department to put pressure on Israel.

“American public opinion is changing. Congress is changing. Israel has become partisan topic in Congress. It used to be bi-partisan,” said Szremski. “It’s now very partisan. It’s only just a matter of time and they know it. That’s why their measures are getting more and more harsh.”

On Saturday, thousands of Palestinians attended noon prayers at Al Aqsa Mosque after the Israeli government re-opened it without any restrictions, following two weeks of confrontations with the Israeli forces after they closed the mosque’s compound and installed metal detectors and surveillance cameras at its gates.