Palestinians denied entry to Al Aqsa praying on the street in Jerusalem. (Twitter) 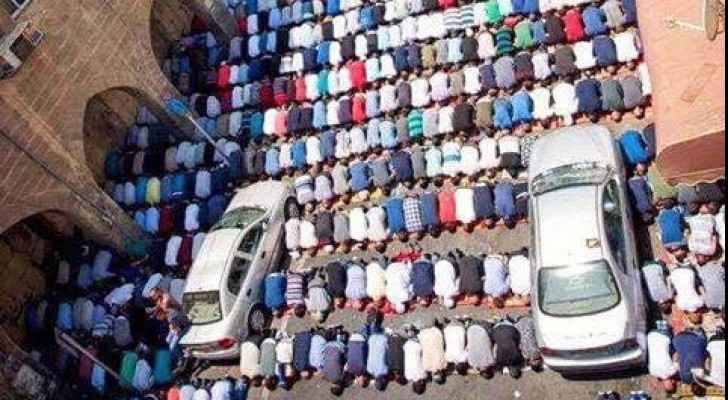 The White House is holding talks with Israel, Jordan and Palestine, alongside other Arab nations, in an effort to find a solution to mounting tensions in Jerusalem and the West Bank over Israeli restrictions on Al Aqsa, Haaretz has reported.

This comes as Israel installs new security cameras at the entrance to the Al Aqsa compound, with officials indicating it was considering "alternatives" to the metal detectors at the holy site.

Tensions have escalated across the West Bank and Jerusalem after three Palestinian assailants and two Israeli policemen were killed in a shoot-out inside the compound on July 14, triggering intensified Israeli security measures including metal detectors, additional surveillance cameras, and turnstiles.

Jordan’s Foreign Minister, Ayman al-Safadi, told the European Union High Representative Federica Mogherini that Jordan is exerting its utmost effort to restore calm and end the crisis, based on principles of security, stability and Israel's respect of the historical situation in Jerusalem.

The Jordanian Foreign Ministry have also made a number of statements in which it called on Israel to remove the metal detectors and refrain from violating the status quo at the Temple Mount.

Members of the Middle East Quartet - Russia, the U.S., the EU and the UN – published a joint statement Saturday expressing concern at the "escalating tensions and violent clashes," urging Jerusalem and Jordan to "work together to uphold the status quo.”