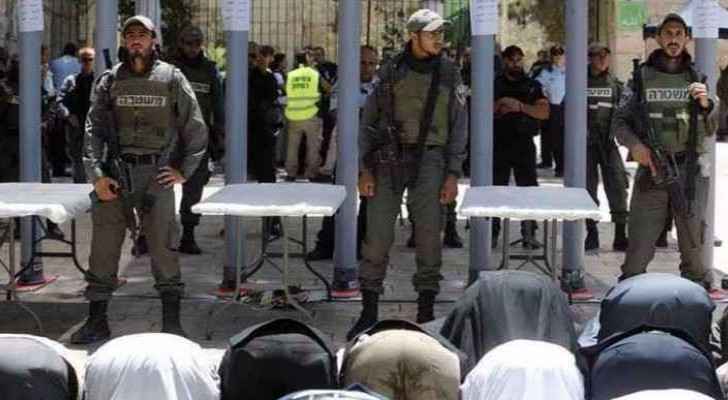 The mufti of Jerusalem, Sheikh Mohammed Hussein, said that prayers will not be accepted from any Muslim who enters through Israeli erected electronic security gates to Al Aqsa.

In a statement, made in conjunction with the at the Islamic organisations in Jerusalem, the Mufti demanded that Muslims do not enter through the electronic gates to Al Aqsa, recently set up by the Israeli occupation authorities.

The Al-Aqsa mosque preacher addressed the Palestinians saying: "You must pray outside Al-Aqsa Mosque by the electronic gates of Al-Aqsa Mosque, and do not enter through the gates at all.”

He added that resisting Israel’s attempts to install security gates should be prioritised over praying inside Al Aqsa.

"In our knowledge, whoever is treacherous towards his society and his people, and violates them in a manner that is in their personal interests, is considered a traitor,” he said.

Muslim religious authorities, who administer the Al Aqsa compound, have refused to pray there since Israeli forces installed metal detectors and additional close-circuit television cameras to monitor the site.

The heightened security comes after three Palestinian assailants shot and killed two Israeli policemen in Jerusalem's Old City. The attackers were subsequently shot dead by Israeli forces inside the compound.

Following the incident, Al Aqsa compound was closed on Friday and Saturday. This was the first time Friday prayers at the site have been cancelled in decades, with the last complete closure of the compound taking place in 1969.