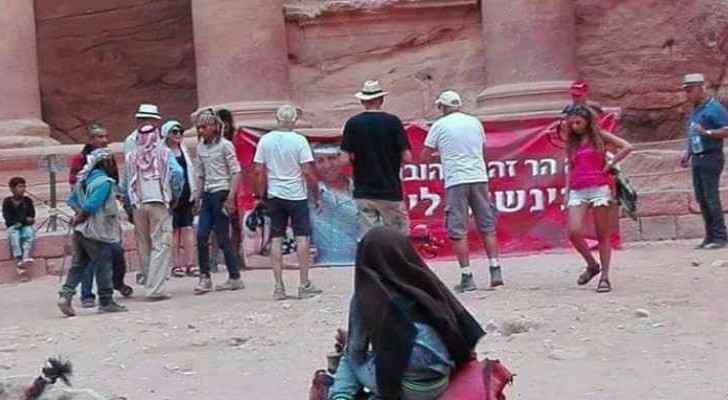 A banner displayed in Petra with Hebrew writing on it caused a stir among Jordanian social media users over the weekend, who believed the sign was posing an anti-Palestine message on it.

On sunday, the Petra Development and Tourism Region Authority (PDTRA) clarified that the sign, with a picture of a couple on it, was placed outside the Treasury by an Israeli tourist who was planning on proposing to his girlfriend.

The sign read: “Hanna Zahaf… My love… Will you marry me.”

Contrary to social media users’ belief, the sign did not have phrases supporting the closure of Al Aqsa compound, following the deadly shooting of two Israeli soldiers by two Palestinian assailants on Friday.

PDTRA said that the tourist’s friends cheered him on after he got down on one knee, after which the banner was immediately taken down once the archaeological site’s rangers were alerted of the incident.

The Authority further stressed that “Petra, a site visited by tourists from all over the world, is an historic site, not a ‘stage’ for the display of racist, sectarianist or political banners.”