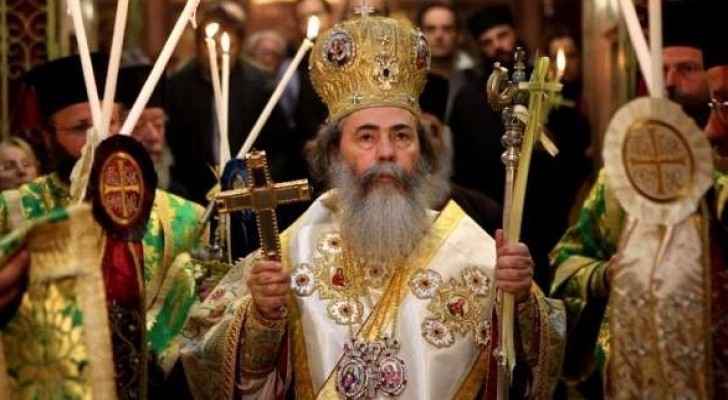 Several Palestinian Orthodox organizations in Jerusalem and Bethlehem condemned the land-selling deal that went on between Israeli investors and businessmen and the Orthodox Church in Jerusalem.

The church had sold hundreds of acres of Palestinian land to Israel last month.

The organizations joined a protest outside the Church of the Nativity in Bethlehem on Sunday, where they demanded that Patriarch Theophilos III of Jerusalem is dismissed from his position for “his role in giving away the church’s property to Israel.”

The Central Orthodox Council and the Arab Orthodox Youth in Palestine demanded that the Patriarch is trialled for his actions, while anyone who cooperated with him on the Israel deal should be fired from their position.

The council said in a statement that “those who are conspiring against their Christian presence in the holy land have betrayed the church and its religious and nationalistic message.”

They added that the church has “sold their identity and have not preserved their land and Arab Christian identity the way they were meant to, because without land, there is no identity.”

Nabil Mashhoor of the council said that “it is time for Orthodox Arabs to demand that this corruption comes to an end as it has been violating our rights for hundreds of years.”

Churches in Jordan reopen for the first time in nearly 3 ....

Churches in Jordan reopen for the first ....