Federal Police fire at Islamic State positions at the end of the street in the Old City. (Kainoa Little) 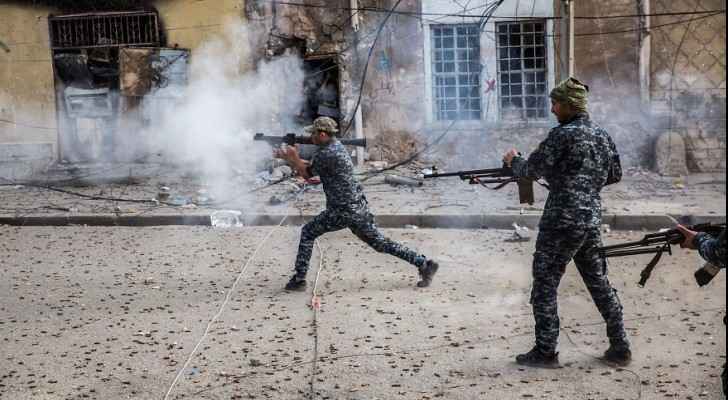 Up to 20,000 civilians are trapped in the last so-called Islamic State group-held areas in Mosul's Old City, which Iraqi forces are battling to retake, a senior UN official said Thursday.

More than eight months since the start of the operation to retake Mosul from the Islamic State group, the jihadists have gone from fully controlling the city to holding a small pocket of territory on the west bank of the River Tigris.

But the fighting against the last IS holdouts is heavy, and civilians caught in the middle of the battle are in "extreme danger," UN humanitarian coordinator in Iraq Lise Grande told AFP.

"Our estimate at this stage is that in the final pockets of the Old City, there could be as many as 15,000 civilians, possibly even as high as 20,000.

"The people that are still trapped inside of these pockets are in terrible condition," facing shortages of food, she said.

"They're in extreme danger from bombardment, from artillery crossfire. The (IS) fighters that are still there are still directly targeting civilians if they try and leave."

The battle has taken a heavy toll on civilians, nearly 700,000 of whom are currently displaced as a result of the fighting, she said.

IS overran large areas north and west of Baghdad in 2014, but Iraqi forces backed by US-led air strikes and other support have since regained much of the ground they lost.