US ready to work with Russia on Syria 'no-fly zones': Tillerson

Secretary of State Rex Tillerson arrives for a meeting on Syria on the sidelines of the G-20 Foreign Ministers' Meeting in Bonn, Germany, on February 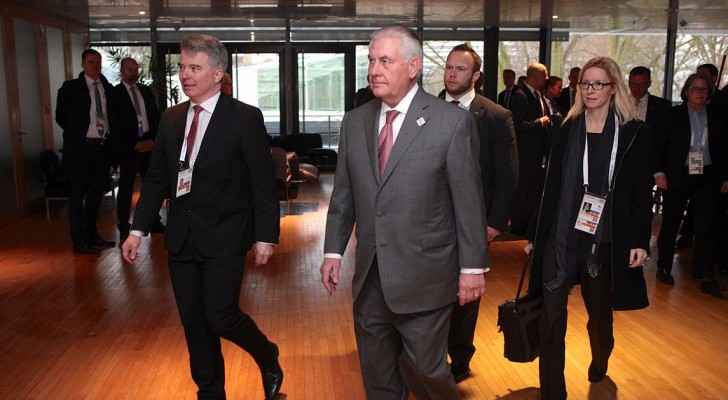 The United States is willing to work with Russia on establishing "no-fly zones" in Syria as part of a joint effort to stabilize the war-ravaged country, the top US diplomat said Wednesday, ahead of President Donald Trump's first face-to-face with Vladimir Putin.

In a wide-ranging statement, Secretary of State Rex Tillerson said Russia had a "special responsibility" to help create stability on the ground -- or risk hobbling the fight against the so-called Islamic State group.

Citing past cooperation in creating deconfliction zones in Syria, Tillerson made a strong case for both countries -- in spite of their "unresolved differences on a number of issues" -- to work together in Syria.

"The United States is prepared to explore the possibility of establishing with Russia joint mechanisms for ensuring stability, including no-fly zones, on the ground ceasefire observers, and coordinated delivery of humanitarian assistance," he said.

Tillerson issued his statement before joining Trump in Europe, where the US leader will meet Putin for the first time on Friday on the sidelines of a G20 summit in Hamburg, Germany. Syria will loom large in their discussions.

It also came as US-backed fighters inched forwards in Raqa's Old City, in what Washington sees as a milestone in the campaign to defeat the Islamic State group in its de facto Syrian capital.

"ISIS has been badly wounded, and is could be [sic] on the brink of complete defeat in Syria if all parties focus on this objective," Tillerson said, according to the written statement issued by the State Deparment.

"In order to complete the mission, the international community, and especially Russia, must remove obstacles to the defeat of ISIS."

"We call upon all parties, including the Syrian government and its allies, Syrian opposition forces, and Coalition forces carrying out the battle to defeat ISIS, to avoid conflict with one another and adhere to agreed geographical boundaries for military de-confliction and protocols for de-escalation."

Russia, Turkey and Iran -- without the United States -- agreed in May to establish four "de-escalation" zones in Syria.

These are supposed to include no-fly areas, where no warplanes can fly so as to guarantee the safety of civilians on the ground.

But on Wednesday those countries said they had failed to agree on the details, such as the boundaries of the zones and who will police them.

Tillerson also said Moscow as a key backer of Syrian President Bashar al-Assad had the responsibility of preventing his regime from further use of chemical weapons.

The United States launched a cruise missile attack on a Syrian air base in April in response to what it said was a government chemical weapons attack on civilians.

Tillerson, speaking later to Fox News aboard the flight to Europe, said US officials "have been engaged with Russia for some time" to identify areas "that we should have mutual interest in."

Syria is "a very complex situation," especially transitioning from defeating IS to stabilizing the country and starting the "lengthy process" of finding political solutions for the Syrian people.

US officials are at "the very beginning" of an effort "to rebuild confidence between ourselves and Russia at the military-to-military level, but also at the diplomatic level," he said.

"At this point it's difficult to say exactly what Russia's intentions are in this relationship."

He added that it was important for Trump and Putin to "have a good exchange... over what they both see as the nature of this relationship between our two countries."

Tillerson to visit Jordan as part of regional tour

Tillerson to visit Jordan as part of regional ....

Tillerson to visit Jordan as part of regional ....

Tillerson to visit Jordan as part of ....