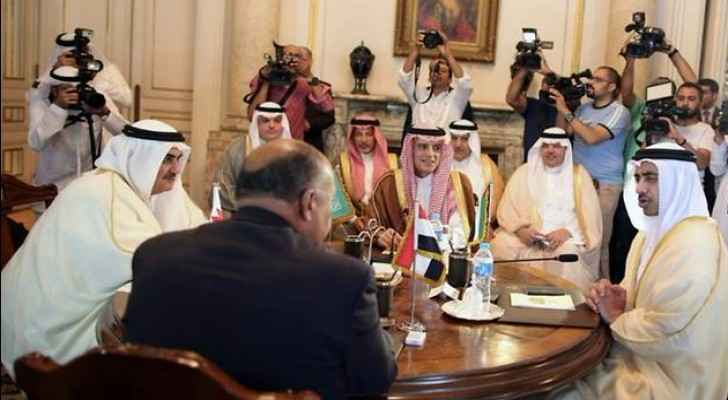 Arab states that have cut ties with Qatar vowed Wednesday to maintain their boycott of the emirate, criticising its "negative" response to their list of demands to end the diplomatic crisis.

Qatar appealed for "dialogue" to resolve the row while US President Donald Trump spoke to Egyptian counterpart Abdel Fattah al-Sisi to urge all parties "to negotiate constructively".

The foreign ministers of Egypt, Saudi Arabia, Bahrain and the United Arab Emirates, meeting in Cairo, "regret the negative response from Qatar," they said in a statement.

Egyptian Foreign Minister Sameh Shoukry said Qatar's response to the bloc's conditions had "no substance" and "reflects a lack of understanding of the gravity of the situation".

The talks in Cairo came a month after the four countries severed ties with Qatar, accusing Doha of supporting extremism.

"The boycott will remain," Saudi Foreign Minister Adel al-Jubeir said at the same news conference in the Egyptian capital.

The four Arab states stopped short of announcing new sanctions but Jubeir said they would "take steps at the appropriate time".

The demands include Doha ending support for the Muslim Brotherhood and closing broadcaster Al-Jazeera.

Saudi Arabia and its allies have not said what steps they could take next, but there are fears of a wider embargo that would hurt the Qatari economy, with credit ratings agency Moody's announcing it was changing Qatar's outlook to negative over the crisis.

The countries issued the 13-point list of demands on June 22, giving Qatar 10 days to respond.

The deadline was extended by 48 hours on Sunday at the request of Kuwait, which is mediating in the crisis, and Qatar handed in the response on Monday.

The contents of the response have not been disclosed, but Qatari Foreign Minister Sheikh Mohammed bin Abdulrahman Al-Thani said the list of demands "is unrealistic and is not actionable".

Qatar has denied any support for extremism and accused the countries of seeking to infringe on its sovereignty.

The other demands include Qatar downgrading ties with Iran -- Saudi Arabia's regional arch-rival -- and shutting down a Turkish military base in the emirate.

In his phone call with Sisi, Trump "reiterated the need for all countries to follow through on their commitments at the Riyadh summit (in May) to stop terrorist financing and discredit extremist ideology," the White House said.

US Secretary of State Rex Tillerson spoke with the emir of Kuwait and stressed Washington's "support" for his efforts to mediate a solution to the crisis, Kuwait's KUNA news agency said.

The UN meanwhile said its under-secretary general for political affairs, Jeffrey Feltman, was in Kuwait for talks on ending the dispute.

Germany's Foreign Minister Sigmar Gabriel said in a statement that he was "pleased to see talks between (the US secretary of state) and the Kuwaitis".

"It is now a matter of the parties entering into negotiations," he added.

Qatar has said repeatedly it is ready for talks on the crisis, and Sheikh Mohammed reiterated that on Wednesday.

"We welcome any serious efforts to resolve our differences with our neighbours," he said.

The minister accused Saudi Arabia and its regional allies of "demanding that we must surrender our sovereignty as the price for ending the siege".

The crisis has raised concern of economic consequences as well as growing instability in the region, home to some of the world's largest energy exporters and key Western allies which host US military bases.

Energy-rich Qatar has been defiant throughout the crisis, insisting it can weather action taken against it.

On Tuesday it even announced a major boost in planned natural gas output, with Qatar Petroleum saying it would increase production to 100 million tonnes a year by 2024, up 30 percent from current levels.

Qatar is the world's leading producer of liquefied natural gas.

Its energy riches have transformed Qatar into one of the world's wealthiest countries, a major international investor and a regional player that will host the 2022 football World Cup.