Turkey protests to Germany after artist calls for 'killing Erdogan'

Turkey protests to Germany after artist calls for 'killing Erdogan' 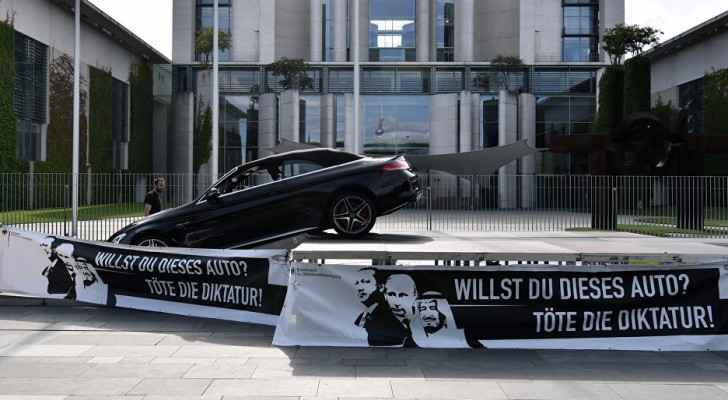 Turkey protested officially to Germany on Tuesday that an artist had been allowed to set up an installation in central Berlin offering a car as a prize in exchange for killing world leaders including President Recep Tayyip Erdogan.

The installation was set up outside the offices of Chancellor Angela Merkel in Berlin on Monday, comprising a Mercedes C-class car and banners with pictures of Erdogan, Russian President Vladimir Putin and Saudi King Salman.

"Do you want this car? Kill dictatorship!" said the slogan.

Erdogan is frequently accused by opponents of acting like a dictator, although he rubbishes the idea, noting that he is the first directly-elected president in Turkish history.

The action was staged by the art collective Centre for Political Beauty led bv Phillip Ruch, which has made several stunts in the past including displaying four tigers in the centre of Berlin to protest at refugee policy.

"We strongly condemn the installation in front of the federal chancellery in Berlin," Turkey's foreign ministry said in a statement.

"The banner is a direct incitement to violence," the foreign ministry added, calling on the German authorities to "take the necessary action" to remedy the situation.

The ministry added that it had transmitted Turkey's anger to the German embassy in Ankara and sent an urgent note to the German foreign ministry in Berlin.

Turkey's embassy to Berlin said it was "incomprehensible and unacceptable" that Ruch had been allowed to set up such an installation with no intervention from the local security forces.

"It is clear that in such a sensitive time when communal peace and shared values need to be protected, these kinds of actions encouraging hatred and violence will not serve peace," the embassy said in a statement.

All three leaders targeted in the stunt were due to attend the G20 summit in Hamburg this Friday and Saturday although King Salman has now cancelled his trip.

Turkey-German relations are going through a rocky period with Berlin stepping up its criticism of Ankara's rights record under Erdogan.

In another incident claimed by the Centre for Political Beauty, Turkish police at the weekend said they had seized from a hotel room in the centre of Istanbul a machine that was printing and distributing anti-Erdogan pamphlets onto the street below.

Reports on Turkish media said police were looking for a German citizen who had already left the country.

The Centre for Political Beauty said over 1,000 copies of an anti-Erdogan leaflet were thrown from a hotel window into Gezi Park in Istanbul.