For families fleeing ISIS, a waystation in Aleppo

For families fleeing ISIS, a waystation in Aleppo 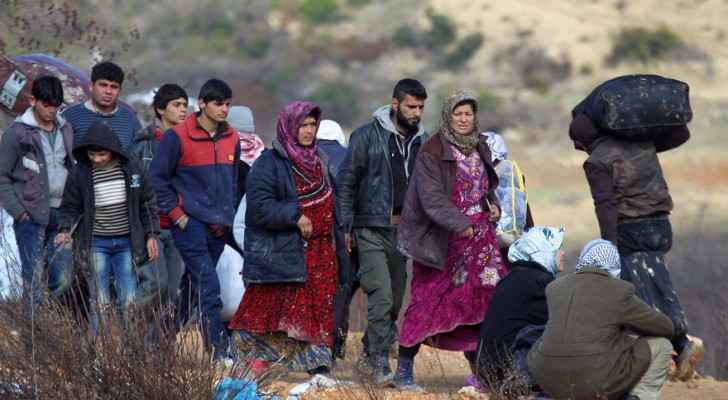 Syrian escapees from the Islamic State group languished for hours on the sizzling concrete pavements at Aleppo's main bus station, their faces gaunt and eyes rimmed by dark circles.

Just six months ago, the Ramussa station was the main transit point for thousands of people bussed out of second city Aleppo as part of a landmark evacuation deal.

Now, buses are starting to trickle through again -- this time carrying traumatised families fleeing IS's dwindling territory to government-held zones in the rest of the country.

"It's a miracle that we're here," said Umm Hammoud, 45, who fled IS's bastion city Raqa with her 10 children aboard a pickup truck.

She spoke to AFP while waiting for a bus to take her to Syria's third city Homs, where she will be reunited with long-lost relatives.

This time, it took her and her family a month.

"We fled Raqa at the beginning of Ramadan (the Muslim holy month that began in late May) after each paying 150,000 Syrian pounds," or around $300, Umm Hammoud told AFP.

She recounted a terrifying journey delayed by heavy air strikes on jihadist-held villages and difficulty negotiating with smugglers.

"When we got here, we could barely believe that we survived," she said as she struggled to soothe her wailing six-month-old in the scorching heat.

Umm Hammoud and her family skirted landmines, air strikes, and an IS patrol unit tracking down anyone trying to flee the city.

But when they reached Aleppo, they did not find the bustling commercial metropolis they had once known.

Previously Syria's industrial hub, Aleppo had been ravaged by four years of battles between rebel groups and the army before the December evacuation deal allowed the military to retake full control.

"I visited Aleppo as a child with my parents. We'd eat at restaurants, it was beautiful," Umm Hammoud recalled, her voice cracking.

Much of the city is now in ruins, a shadow of its former self -- like the Ramussa station.

For months, rebels and regime battled hard over the bus station to gain access to the route leading out of Aleppo to other government-controlled parts of Syria.

When the evacuation deal was reached, thousands of rebels and civilians were bussed out of the then-snowy streets of Aleppo via Ramussa.

The station reopened in July, but the main garage remains almost empty save for a few charred cars and mangled metal barricades.

Ticketing offices that were once teeming with customers are mostly abandoned.

"In the past, there was a bus leaving every 30 minutes. It used to be packed here," said Mohammad, a ticketing officer at the Al-Eman bus company, one of the few that returned to Ramussa when it reopened.

Now, officials estimate that no more than 15 buses pass through daily, their passengers in dire conditions.

"There are sick people that haven't taken any medicine in years. The children arriving are famished," Mohammad said.

"Sometimes they spend 24 hours just waiting" for the next bus, he said.

- 'From one wreckage to another' -

Elderly shepherd Abbud al-Sayah was waiting in Ramussa for a bus west to Latakia, a government bastion on Syria's Mediterranean coast.

He fled Raqa province three months ago as the US-backed Syrian Democratic Forces battled across the arid farmland there to reach its provincial capital.

"I lived in the desert and took care of a flock of sheep with some relatives," Sayah, wearing thick glasses, told AFP.

Ruqaya, 66, had travelled the farthest to reach Aleppo.

She crossed nearly 400 kilometres (250 miles) from the IS-held town of Mayadeen near Syria's eastern border with Iraq.

Mayadeen has been battered by air strikes from the US-led coalition battling IS in Syria and Iraq, and Ruqaya said she was lucky to have survived.

It cost her family more than $3,700 to be smuggled out, and their four-day journey turned into a macabre tour of towns and cities devastated by Syria's six-year war.

"We went from one scene of wreckage to another. Tabqa (west of Raqa) was totally ravaged," the mother of five said.

"In Aleppo, which was once a paradise, I saw the hospital where one of my sons used to work. It was completely flattened," she said.

"Why all this destruction? Why are you chasing people from their homes?"