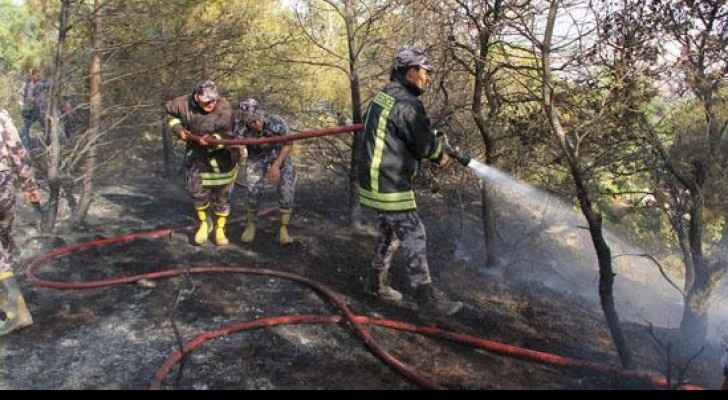 Firefighters were able to put out two separate fires in Jordan on Saturday.

The first fire started in a shrubland near Sports City in the capital Amman. Firefighters were able to put out the flames, which engulfed half an acre of land, while reporting no casualties.

Meanwhile, firefighters in Ajloun fought a blaze that engulfed 20 acres of forest trees - including olive trees - and shrubland.

The land was set alight in the Um Qantara area, and firefighters reported no injuries or casualties as a result of the fire.

In light of the increasing fires Jordan has been recently witnessing, last week, the Environmental Protection Department (Rangers) launched an unmanned drone to survey forests and shrublands in Ajloun and Jerash.

In addition to the drone, Rangers will be using three all-terrain vehicles (ATV) inside the forests to prevent anyone from logging, over-chopping, arson and any other form of abuse.

Head of Rangers, Mishaal Obeidat, said that the drone is part of the Public Security Directorate’s effort to protect and preserve forests and shrublands in the Kingdom.

Fire breaks out in commercial store, cafe in Downtown ....

Fire breaks out in commercial store, cafe in ....

Fire breaks out in commercial store, cafe in ....

Fire breaks out in commercial store, ....