Late in the evening on June 28, 2016 three attackers shot randomly at passengers and staff at Istanbul's Ataturk International Airport before blowing 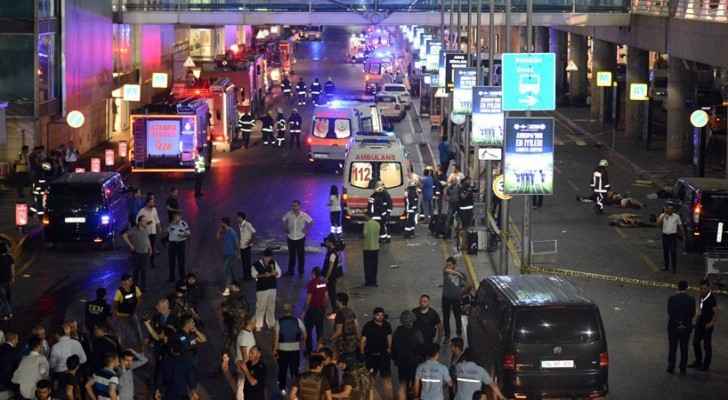 Turkey on Wednesday marked one year since the triple suicide bombing and gun attack on its main international airport in Istanbul that left dozens dead and was blamed on Islamic State jihadists.

Late in the evening on June 28, 2016 three attackers shot randomly at passengers and staff at Istanbul's Ataturk International Airport before blowing themselves up.

Forty-five people were killed, the deadliest attack on an airport in Turkey's history.

At a ceremony just outside the arrivals hall of the airport, weeping relatives of those killed laid flowers by a black memorial where all the victims' names are inscribed.

Some wept as they touched the inscriptions bearing the names of those they lost, an AFP photographer said. "We remember with respect, we will never forget," read a ribbon on a memorial wreath.

The government blamed the Islamic State (IS) group -- who at the time were holding swathes of neighbouring Iraq and Syria -- although the jihadists never issued a claim for the attack.

The attack also heralded a summer of bloodshed in Turkey including the July 15 failed coup attempt to oust President Recep Tayyip Erdogan, which authorities blamed on the US-based preacher Fethullah Gulen. He denies the charges.

After the airport attack authorities arrested 42 suspects, with four more still on the run. Those held, who include suspects from Russia, Algeria and Turkey, are due to go on trial on November 13.

The authorities have said a large number of those linked to the attack are from ex-Soviet Central Asia or Russia's mainly Muslim northern Caucasus region.

Two suicide bombers were identified as Vadim Osmanov and Rakhim Bulgarov, although the third was never named.

Later in the summer 57 people, 34 of them children, were killed in a suicide bombing at a Kurdish wedding in the southeastern city of Gaziantep also blamed on IS.

And on New Year's night 39 people were killed, mainly foreigners, in a jihadist gun attack on the elite Reina nightclub in Istanbul just 75 minutes into 2017.

IS claimed that assault, the first clear claim it has ever issued for any attack in Turkey.

The Uzbek gunman who carried out the Reina attack, Abdulgadir Masharipov, was detained by the authorities after 17 days on the run and is set to go on trial along with alleged accomplices on December 11.

The capture alive of Masharipov was seen as a major success for the security forces and raised hope that his interrogation may have allowed police to garner crucial intelligence about IS cells.