Eid truce in war-torn Philippines comes to an end

Assaults backed by air and artillery bombardment had stopped at the start of Islamic prayers at 6am. (Twitter) 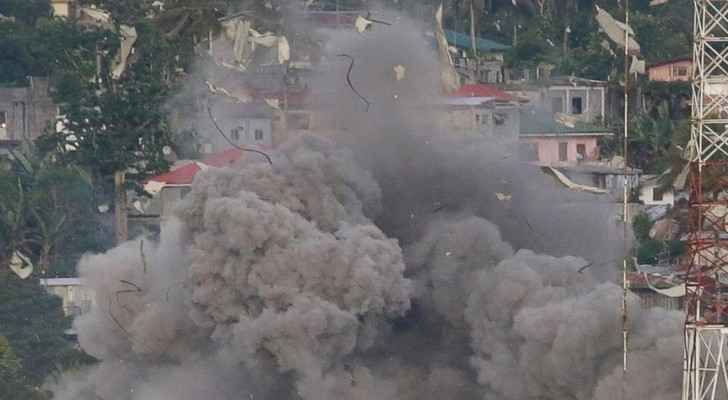 An eight-hour ceasefire in a Philippine city allowing residents to celebrate the end of Ramadan came to an abrupt end Sunday afternoon as the government continued its offensive against Islamist militants occupying parts of war-torn Marawi.

Assaults backed by air and artillery bombardment had stopped at the start of Islamic prayers at 6am but gunfire broke out as soon as the truce ended around 2pm, AFP reporters in Marawi said.

"It's already been more than 30 days (of fighting) and we received reports that some of them have nothing to eat," Galvez said.

The negotiators later Sunday emerged from the conflict zone with five civilians, incuding a mother and her 16-month-old daughter.

The woman said she had given birth to another child just two weeks ago in the middle of the fighting but her infant boy died due to lack of food, according to police who interviewed her.

A video released by the military showed the rescued residents looking terrified, pale and haggard.

Military chief General Eduardo Ano ordered his forces to observe a "humanitarian pause" during the Eid al-Fitr holiday in Marawi, the most important Muslim city in the mainly Catholic Philippines.

The Eid al-Fitr festival ends the fasting month of Ramadan.

"We declare a lull in our current operations in the city on that day as a manifestation of our high respect to the Islamic faith," Ano said in a statement.

Hundreds of militants, flying the flag of the Islamic State group and backed by foreign fighters, seized swathes of Marawi in the southern region of Mindanao last month, sparking bloody street battles and raising regional concern.

Troops have launched a relentless air and ground offensive but have failed to dislodge gunmen from entrenched positions in pockets of the city.

Much of the lakeside city is now in ruins while most of its 200,000 residents have fled to evacuation centres or to the homes of relatives and friends in other towns.

An emotional Sunday prayer was held away from the conflict zone in Marawi, with several Muslim worshippers breaking down, including the imam, television footages showed.

"This is the saddest Eid celeberation in recent memory," Zia Alonto Adiong, a legislator for an autonomous Muslim region that covers Marawi, said in a Facebook post.

"It pains us to see families who can’t even share meals together, pray together," he said, blaming the militants for the turmoil.

At Iligan just north of Marawi, evacuees dressed in colourful flowing robes marked the end of Ramadan by holding prayers on the grounds of city hall, with armed police commandos standing guard.

Presidential spokesman Ernesto Abella said Sunday a Philippine Navy ship was sent to Cotabato south of Marawi to bring supplies for soldiers involved in the fighting and serve as a floating hospital for the wounded.

Nearly 300 militants and 67 troops have been killed in the fighting, according to official figures.

Military officials have said troops are having difficulty because the militants are using civilians as human shields.

In May Philippine President Rodrigo Duterte declared martial law across all of Mindanao to quell what he described as a rebellion aimed at establishing an Islamic State caliphate in the area.

Foreign fighters, including those from Chechnya, Indonesia and Malaysia, are among those killed in the Marawi conflict.

A senior military commander said on Saturday that Isnilon Hapilon, a leader of the Marawi attack and one of America's most wanted terrorists, may have slipped out of the city.

"He (Hapilon) is not being heard or monitored commanding troops on the ground," Herrera said in Marawi.

Family of young man killed in Irbid reaches 'atwa' for ....