In 2016, police arrested at least 69 people as part of its fight against Islamist terrorism. 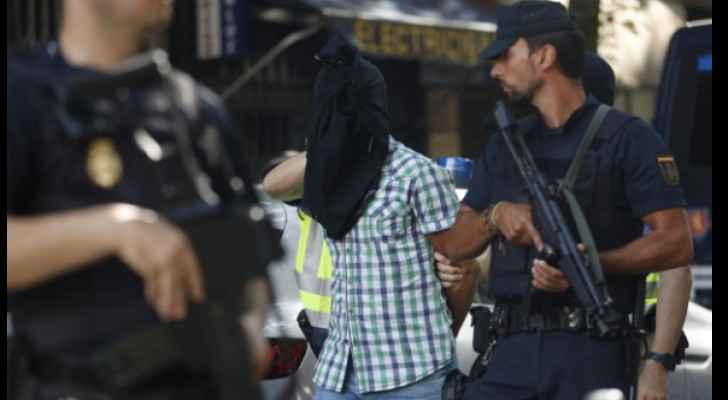 Spain said Wednesday that it had arrested three Moroccans, including a presumed member of the Islamic State group whose profile matched those of terrorists implicated in recent attacks in Britain and France.

In a statement, the Interior Ministry said police apprehended the main suspect, aged 32, in the Madrid neighbourhood of Las Delicias, where the three men lived together.

The man, who was not identified, was described as being "in an advanced state of radicalisation" and had in his possession "an extensive ideological and electronic library of numerous manuals on jihadist terrorism", including specific manuals on suicide bombing and "electronic jihad", the ministry said.

"He had an extremely dangerous profile, similar to that of terrorists recently implicated in the attacks in Britain or in France," it added.

The man intended to radicalise others and persuade them to commit terror acts, the ministry said, making him "an obvious threat to the security of our country."

During the nighttime raid, police also arrested the two other men, aged 33 and 38, who lived with him.

The arrests came as security measures have been tightened ahead of the Friday opening of the WorldPride festival, one of the world's largest LGBTQ events, with an estimated two million people expected to attend through July 2.

For the past two years, Spain, the third most popular tourist destination in the world, has been on high terror alert.

While both Morocco and Spain have been spared in the wave of recent jihadist-inspired terror attacks that have struck Europe, Rabat and Madrid collaborate closely in the fight against extremism.

In 2016, police arrested at least 69 people as part of its fight against Islamist terrorism and have apprehended more than 35 people this year, according to ministry figures.

In 2004, Spain was hit by the deadliest Islamist attack on European soil, when 191 people were killed in bombings on commuter trains in Madrid.

And Morocco was targeted in 2003 and 2011 in attacks on the cities of Casablanca and Marrakesh, with 45 and 17 fatalities respectively.

US declares ISIS recruiter from India a ....