Jordan and France are bound by a “deep-rooted friendship and cooperation”, Macron (Photo from Royal Court) 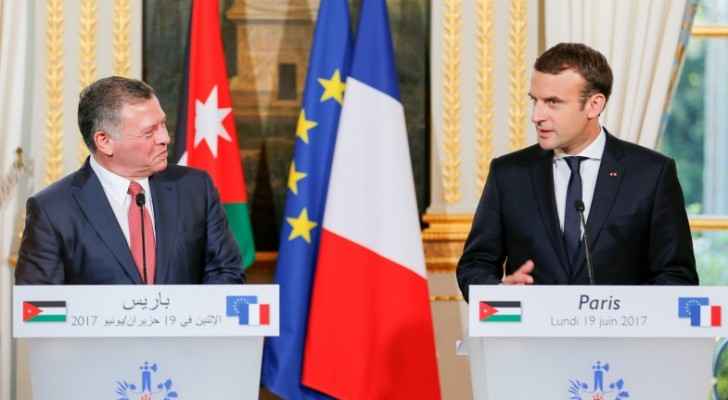 His Majesty King Abdullah on Monday met with French President Emmanuel Macron at the Élysée Palace in Paris, where talks focused on the latest regional and international developments and means to enhance bilateral cooperation and partnership.

Discussions between the King and Macron, held in the presence of senior Jordanian and French officials, highlighted the importance of continuing coordination and consultation between Amman and Paris on issues of mutual interest, and expanding economic and military cooperation, a Royal Court statement said on Monday.

In joint statements to journalists following the leaders' talks, the King expressed his happiness in visiting France and meeting with Macron, stressing the "historical" relations between the two countries, the statement added.

The monarch also congratulated Macron on his recent election as president of the French Republic, voicing his willingness to work with the French president to enhance bilateral relations in order to achieve peace and security in the region and the entire world.

It was truly a pleasure meeting with President @EmmanuelMacron today. France will always have a friend and partner in Jordan pic.twitter.com/FySo1YWgAN

For his part, Macron said that Jordan and France are bound by a “deep-rooted friendship and cooperation”.

He said talks with the King extensively covered issues of mutual concern, noting that the two countries share “one vision” on the challenges currently facing the Near East and the need for strategic dialogue over such issues, the statement continued.

The French president highlighted the fight against terrorism and extremism, praising Jordan for its resilience and ability to remain intact in the midst of a challenging regional situation, while also commending Jordan’s contribution to anti-Daesh efforts.

Macron also noted Jordan’s “pivotal regional role” as a neighbour of Syria and host to a large number of refugees.

He voiced Paris’ solidarity with Jordan as it seeks to keep the southern part of Syria, neighbouring Jordan's northern border, stable and calm, vowing to deploy its diplomatic and political tools to restore stability to the area and ensure an “inclusive solution” to the crisis, the statement said.