Settlers walking around near the Dome of the Rock. 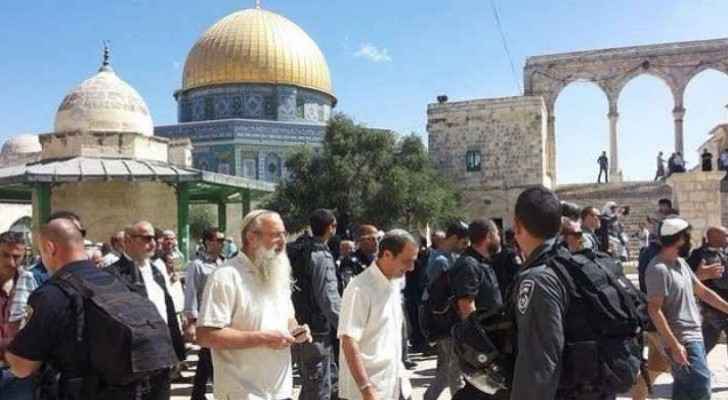 Jordan condemned the storming of Al Aqsa Mosque’s yards and the assault of worshippers using pepper spray and other methods, and the closing of Al-Qibli Mosques’ doors by large numbers of Israeli security forces and extremist groups.

Mohammad al Momani, government spokesperson and State Minister for Media Affairs, said on Sunday that “such provocative actions constitute a violation of the sanctity of the Al-Aqsa Mosque / Haram al-Sharif, and threaten to inflame the passions of Muslims everywhere,” according to Petra News Agency.

Additionally, al Momani held Israel solely responsible for the safety of Al Aqsa Mosque, worshippers praying under its roof and Awqaf cadres, citing their obligation to protect them under international law and international humanitarian law.

The government spokesman further demanded that Israel immediately halts such “provocative and irresponsible” actions, which, according to him, “undermine efforts to reach a just and comprehensive peace that guarantees justice for the Palestinians and security for Israel.”

A letter of protest was sent to the Israeli government via the Israeli Embassy in Amman, where the Ministry of Foreign and Expatriate Affairs strongly condemned and rejected the Israeli violations that took place on Sunday morning, while demanding an immediate stop to such practices.